AGP is a constituent of the ruling coalition, but opposes CAA 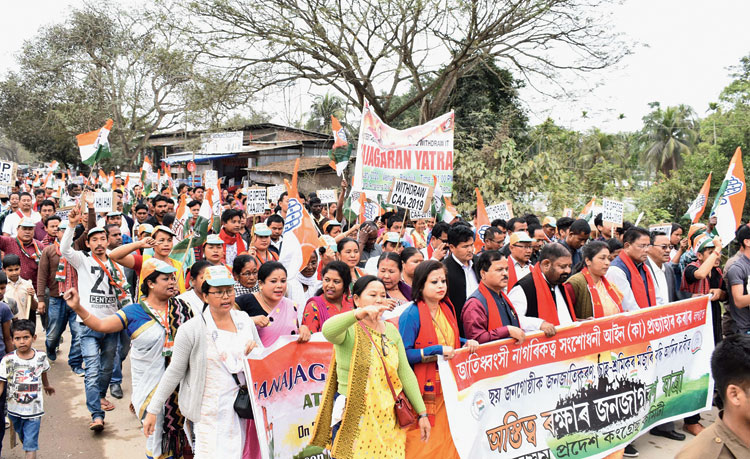 The Opposition Congress is trying to get the AGP in the anti-Citizenship Amendment Act mix in the state Assembly to check the ruling BJP in the March 29 Rajya Sabha polls.

This became clear when Leader of the Opposition in the state Assembly, Debabrata Saikia, urged the AGP to vote for an anti-CAA candidate in the polls.

The AGP is a constituent of the ruling coalition, but opposes the CAA, which will accord citizenship to those who have illegally entered India till December 2014 from Pakistan, Bangladesh and Afghanistan.

According to Saikia, the Rajya Sabha polls is an opportunity for the AGP to convey its sincerity vis-à-vis its opposition to the CAA.

“They have filed a case in Supreme Court. Now they should vote against the CAA candidate in the Assembly to convey that it means what it says,” Saikia said.

The Congress is hoping that the AGP MLAs opposing the CAA may vote against or abstain to send a message to their leadership in the run-up to the 2021 Assembly polls.

BJP leader Himanta Biswa Sarma said the BJP would contest one of the three seats and leave one to its ally Bodoland People’s Front (BPF). He also said there was no point contesting the third seat if the Opposition parties join hands.

In the 126-member Assembly, the BJP and its alliance partners have 86 seats, comprising 60 of the BJP, 14 of the AGP and 12 of the BPF. They also have support of the lone Independent candidate. Two seats are vacant. The number of MLAs of the Congress and the AIUDF are 23 and 14 respectively. To win a seat in a House of 124, a candidate will need 32 votes.

The PCC on Thursday claimed that the hill people are opposing the Citizenship Amendment Act (CAA) brigade despite the state government’s claims that the hills people are supporting the Act.

Assam PCC president Ripun Bora told reporters this after attending the ongoing three Anti-CAA Janajagaran Padayatra of the party from Tuesday to Thursday to 27 in the three hill districts of Assam.

“The anti-CAA programme in the three hill districts and large turnout of the residents have laid bare the tall claims of BJP leader Himanta Biswa Sarma that the hill people are supporting the CAA,” Bora said

He said the padayatra, demanding the repeal of CAA, began at West Karbi Anglong district to Dangkamokam, covering 5km with 3,000 people.

He later addressed a gathering at Dangkamokam town.

“On Wednesday, after addressing a gathering of 2,000 people at Dakmoka of East Karbi Anglong District, the PCC started a 3km padayatra. The second programme was at Bokolia where more than 1,500 people participated in the padayatra and the public meeting. In the evening, there was a huge rally at Diphu town,” Bora said.

Bora said a padayatra was also organised from Maibong Dishru Club to Maibong market and a protest meeting at Maibong Rajiv Bhawan on Thursday.