Advertisement
Home / North-east / Colonies, boxes given away on bee day

Colonies, boxes given away on bee day

Bee boxes and bee colonies were distributed among 20 beekeepers of Manipur on Monday to mark World Bee Day at Manipur Press Club. The event was organised by the Khadi and Village Industries Commission (KVIC) and Khunai Apunba Beekeeping and Honey Processing and Producing Company. 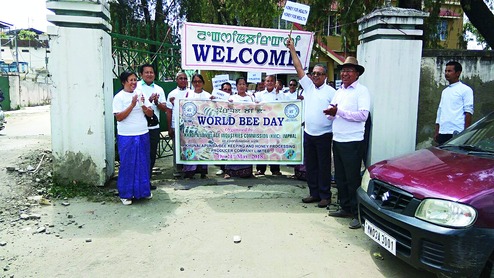 Imphal: Bee boxes and bee colonies were distributed among 20 beekeepers of Manipur on Monday to mark World Bee Day at Manipur Press Club. The event was organised by the Khadi and Village Industries Commission (KVIC) and Khunai Apunba Beekeeping and Honey Processing and Producing Company.

Employees of the company took out a procession to spread awareness about economic potentiality of beekeeping.

The KVIC implements "Honey Mission" for beekeeping in Manipur to generate employment. Under this, bee boxes are presented to selected beekeepers who are trained in this particular field. Bee boxes, numbering 200, were distributed among 20 beekeepers along with live bee colonies and accessories.

On the inauguration of the first phase of bee distribution under the mission, the company distributed bee boxes with live bee colonies to 20 beekeepers during a ceremony held on April 27 here.

The mission aims to provide 1,000 bee boxes to trained beekeepers.

Chairman of the company A. Tarakishore said the step aims to motivate beekeepers and bee lovers and promote apiculture in the state under the KVIC. He said Manipur has the potential of bee farming, but due to lack of bee park the business cannot be expanded. He said for the first phase bee box, bee belt, smoker, live bee colonies with stands will be distributed among 20 bee farmers.

Tarakishore said apiculture is a good business where one rears bees easily at any place outside their houses. "Farmers can earn huge profit with low investment. We will give priority to SCs and STs," he added.

On December 20 last year, the UN General Assembly adopted a resolution declaring May 20 as World Bee Day. However, it is observed here on Monday.

On this day, beekeepers across the world have their attention focused on importance of preserving honey bees and all other pollinators and people are reminded about significance of bees .

According to the organisers, all UN member states supported the resolution with 115 states effectively becoming co-sponsors, including India.

Beekeeping not only provides honey to beekeepers, but also enriches agro-horticultural crops by its unique pollination method.

Many scientists are of the view that income derived by a beekeeper by way of increased crop yield due to bee pollination is much higher than the value of honey he harvests.

"So bees are the best friends of farmers because of their twin gifts - honey and higher crop yield," Tarakishore said.