Activities could remain suspended till probe into killings is over 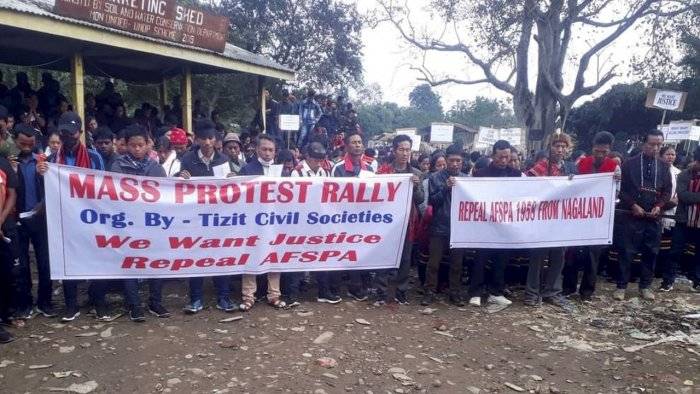 The Assam Rifles have “temporarily suspended” counter-insurgency operations in Mon district of Nagaland following the uproar over the death of 14 civilians near Oting village in a botched anti-militant operation and its aftermath in December.

Officials in Nagaland told The Telegraph on Saturday that the operations could remain suspended till the inquiries into the civilian deaths were complete. The Assam Rifles is a paramilitary force under the administrative control of the Union home ministry and operational control of the army.

Efforts to get reactions from the army and the Assam Rifles were unsuccessful.

A Nagaland government official said on Sunday: “I am not aware of other areas in the state but in Mon right now, they (the Assam Rifles) are not moving out anywhere except for ration and other such activities... not moving out much.”

The 27 Assam Rifles is based in Mon district that  borders Myanmar.

“A suspension of operations means no area domination, no patrolling, no arrests and no searches by either the army or the Assam Rifles. There’s been a lot of anger over the botched operation,” an official said.

Officials said the temporary suspension of operations was a confidence-building measure to try and restore normality.

The civilian deaths have re-ignited demands from political and civil society organisations for withdrawal of the Armed Forces Special Powers Act (AFSPA) — which gives the forces extraordinary powers to search, arrest and shoot in designated troubled areas — from Nagaland. The Assembly too had passed such a resolution but the Centre on December 30 extended the AFSPA's enforcement in Nagaland by another six months.

The December operation, carried out by army special forces, had been based on “credible” intelligence about the movement of insurgents. The Assam Rifles had provided back-up. The area is said to be frequented by militants from the NSCN-K, which has no “ceasefire” with the Centre.

Both Union home minister Amit Shah and the army chief, General M.M. Naravane, have expressed regret over the civilian killings and promised action against those involved.

The army has constituted a court of inquiry and also allowed the Nagaland government's special investigation team (SIT) to question personnel of the Jorhat-based 21 Para Special Forces who were involved in the operation.

Sources said the SIT had wrapped up its probe, having examined 85 civilians and 37 army and Assam Rifles personnel — a reflection of the “cooperation” extended by the armed forces. The army’s court of inquiry is progressing expeditiously, they added.

The Mon-based Konyak civil society organisations, which are at the forefront of the campaign seeking justice for the victims, held a summit in Mon on January 14. They resolved to build a “Genocide Park” at a site allotted by the district administration and to continue their “non-cooperation” with the armed forces till justice was done.

A two-day, 74km walkathon from Dimapur to Kohima was held from January 10 by people seeking justice for the December victims and withdrawal of the AFSPA.

The AFSPA was imposed in 1958 in the Naga Hills, then a part of Assam, to check insurgency. It has never been lifted from Nagaland, which attained statehood in 1963.