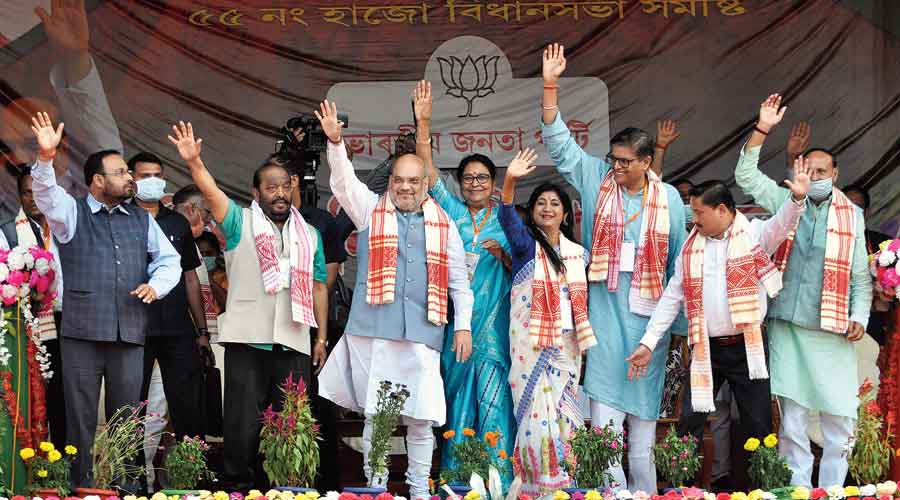 Union home minister Amit Shah and other BJP leaders wave at the crowd during an election rally at Hajo in Kamrup district of Assam on Wednesday.
PTI
PTI   |   Bijni, Hajo, Sonapur   |   Published 01.04.21, 01:02 AM

Union home minister Amit Shah on Wednesday accused the Congress and the AIUDF of hankering for power in Assam to open the borders for infiltrators and said emphatically that the BJP will not allow the state to become a hub for illegal immigrants again after freeing the land encroached by them during last five years.

Taking a swipe at All India United Democratic Front chief Badruddin Ajmal for claiming that the “lock and key” (AIUDF symbol) of forming the next government in the state is in his hands, Shah said the people would decide who will run Assam. “Kaan khol kar sunlo Ajmal, Assam ko ghuspetiyo ke adda phir se nahin banne denge (Ajmal listen carefully we will not allow Assam to become a hub for infiltrators again),” Shah said.

He began the day with a rally at Bijni constituency in Chirang district that comes under Bodoland Territorial Region followed by public meetings at Hajo in Kamrup and Dispur in Kamrup (metro) districts.

Shah accused the Congress of failing to stop infiltration, and urged “haame aur paanch saal de dijiye, aadmi toh kya parinde bhi ghus nahi sakenge (give us another five years, and we will ensure that not only the infiltrators but even birds cannot enter illegally)”.

At the rally in Sonapur, Shah said that if there is a government of Congress and Ajmal, there will be no stop to infiltration and they “want to come to power with the hope to open the locks of the borders to let infiltrators in. “The keys, however, will remain in the hands of Prime Minister Narendra Modi and he will not allow a single illegal person to come in. So (Badruddin) Ajmal mian, ‘aap din mein sapna dekhna bandh kijiye (Ajmal stop day dreaming)’.”

Former Congress chief minister Tarun Gogoi had dismissed Ajmal saying “Who is Ajmal?” but now Rahul Gandhi says that the AIUDF is “Assam’s identity, but we will not allow this at any cost”, Shah said.

He also accused Rahul, who is on a visit to the state to address election rallies on Wednesday, of coming for tourism purpose and talking about Ajmal being Assam's identity. “It is Kamakhya temple, Vaishnav saint Srimanta Sankaradeva and Madhavdeva, brave Ahom general Lachit Barphukan Bharat Ratnas Gopinath Bordoloi and Bhupen Hazarika who represent Assam’s identity and the Congress and Ajmal will not be allowed to change this,” Shah said.

He claimed that it is the BJP’s double-engine government at the Centre and chief minister Sarbananda Sonowal which successfully ended violence and agitation in the state and took it forward on the path of development. “Five years ago, I as the party president had come to you and promised to make Assam free from violence and agitation and ensure development. We have fulfilled our promises and give us another five years and we will make the state infiltrator-free and flood-free,” he said.

In the Assam elections there are two groups — one of BJP-AGP-UPPL which promises development — and the other of Congress riding on Ajmal’s shoulders which will bring in more infiltrators who will take away not only the food, land and other resources of the Assamese but also destroy the culture and identity of the people, he said.

“It is now for the people of Assam to decide whether they want to vote for Modiji’s Atmanirbhar (self-reliant) Assam or for Maulana nirbhar Assam,” he wryly said.

The home minister accused the Congress of not solving the problem of insurgency, leading to the death of so many people. But Prime Minister Narendra Modi took initiative for signing of the Bodo Accord, paving the way for permanent peace in the state, he said. “I assure everybody that clauses of the Accord will be fulfilled by 2022 and we have already done two-thirds of these,” he added.

Shah further accused the Congress of dividing the Assamese society on different lines like Bodo-Non Bodo, Hindu-Muslim, Assamese-Bengali, Upper-lower Assam besides tribes and non-tribes. “It is the Congress culture to divide and make people fight amongst each other. On the other hand, the Prime Minister believes in ‘Sabka Saath, Sabka Vikas and Sabka Vishwas’ and all people, irrespective of any community or religion can avail benefits of all government schemes,” he added.

Shah said that the bamboo available in Assam can be supplied to the paper industry in the entire country and assured that the closed paper mills in the state will be reopened while bamboo products will help youths to take up self-employment.

At the venue of the two rallies in the suburbs of Guwahati, Shah assured that the city will be developed as the “start-up capital of Southeast Asia”. Guwahati will also be developed as a sport hub so that it can bid to host the 2038 Asia Games, he added.