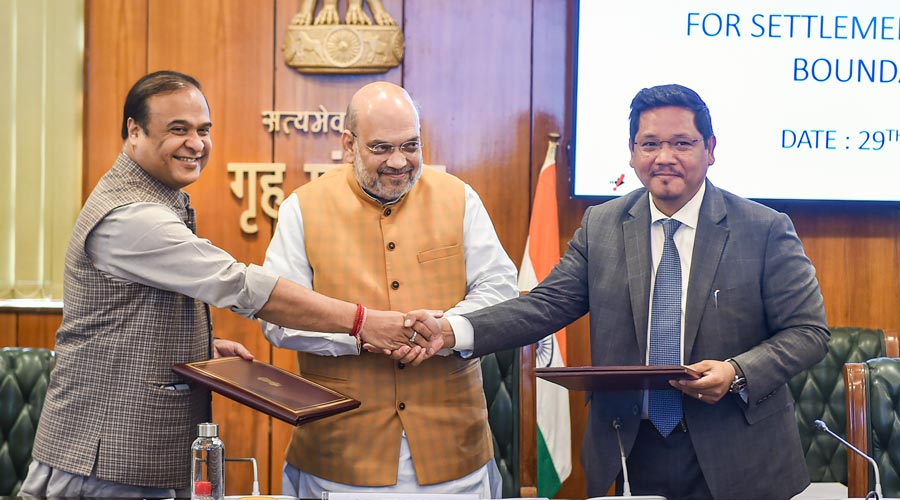 Assam and Meghalaya on Tuesday decided to end their five-decade-old border dispute in six of the 12 contested locations that often raised tensions between the two states, with Union Home Minister Amit Shah calling it a "historic day" for the Northeast. The agreement was signed in the presence of Shah by Chief Ministers of Assam and Meghalaya Himanta Biswa Sarma and Conrad Sangma respectively.

The pact will resolve the protracted dispute in six of the 12 places along the 884.9 km border between the two states. "It is a historic day for the Northeast," Shah said at the function held at the Ministry of Home Affairs here.

The home minister said, with the signing of the agreement, 70 per cent of the border dispute between the two states has been resolved and hoped that a solution will be found for the remaining six locations soon. "This inter-state boundary settlement will usher in a new era of peace, harmony and progress in Assam and Meghalaya. I want to assure our sisters and brothers of Northeast that Prime Minister Narendra Modi-led central government will leave no stone unturned in fulfilling their aspirations," he said.

Shah said it was another milestone towards fulfilling the prime minister's resolve of a peaceful and dispute-free Northeast. He also said the agreement amplifies cooperative federalism and provides a road map for resolution of other boundary disputes between states.

This interstate boundary settlement will usher in a new era of peace, harmony & progress in the state of Assam & Meghalaya.

I want to assure our sisters and brothers of Northeast that PM @narendramodi led central govt will leave no stone unturned in fulfilling their aspirations. pic.twitter.com/Jij1L761NJ

Assam shares a 2743 km boundary with Manipur, Mizoram, Tripura, Meghalaya, Arunachal Pradesh, Nagaland and West Bengal. It is locked in border disputes with Nagaland, Mizoram, Meghalaya and Arunachal Pradesh. In July 2021, Assam's Cachar district had witnessed a fierce armed clash between the police personnel of Assam and Mizoram. Six Assam police personnel were killed in an armed confrontation with their Mizoram counterparts, forcing the Centre to intervene.

The Tuesday's pact between Assam and Meghalaya is aimed at eliminating the possibility any such violence in the border areas of the two states. There are 36 villages in the six places, covering an area of 36.79 sq km, with regard to which the agreement has been reached.

The two states had formed three committees each in August last year to go into the vexed boundary question. The constitution of the panels had followed two rounds of talks between Sarma and Sangma where the neighbouring states resolved to settle the dispute in a phased manner.

According to the joint final set of recommendations made by the committees, out of 36.79 sq km disputed area taken up for settlement in the first phase, Assam will get full control of 18.51 sq km and Meghalaya 18.28 sq km. Out of the 12 points of dispute between Assam and Meghalaya, the six areas with relatively less critical differences were taken up in the first phase. Sarma said he was grateful to Prime Minister Narendra Modi and the home minister for their continuous guidance to achieve this settlement. "This is a milestone in our collective efforts to strengthen cooperative federalism. Together, we are committed to resolving all such legacy boundary issues very soon," he said.

Meghlaya chief minister Sangma said history has been made with Meghalaya and Assam signing the agreement to officially resolve the dispute in six out of 12 contested areas. He said this important leap is the result of team work by both the governments of Meghalaya and Assam.

Sangma also expressed gratitude to the prime minister and the union home minister for their guidance. He also thanked the Assam chief minister for working together to reach an important milestone for the two states. The boundary dispute between Assam and Meghalaya has lingered for 50 years. However, the effort to resolve it gained pace in recent times.

Meghalaya was carved out of Assam as a separate state in 1972 but the new state had challenged the Assam Reorganisation Act, 1971, leading to dispute in 12 boder locations.

Meanwhile Opposition Trinamul Congress Tuesday accused Meghalaya government of gifting `huge tracts of tribal lands' along the interstate border to Assam while signing a pact to end a 50 year-old border dispute with the larger neighbouring state.

Khasi Hills Autonomous District Council Chief Executive Member Titostarwell Chyne on Tuesday also said the council had written to the state government on reservations to the pact local people, even though the Council considered the pact a welcome move. Last week, a group of traditional bodies (Hima) administrating lands in Ri-Bhoi district had met Chyne to complain about transfer of their lands to Assam.

All India Trinamool Congress (AITC) state president Charles Pyngrope told PTI : I don't know why the state government had to rush in this sensitive matter and go ahead with the Memorandum of Understanding with Assam. It is gifting away huge tracts of tribal land along the interstate border to Assam without the consent of the landowners.

We have raised this issue in the just concluded Assembly and said we wanted the government to take everyone into confidence. We cannot stop them but we are concerned because there are resentments, he said. Chyne while stating he had forwarded the complaints, he welcomed the move taken by the state government to end the dispute. He said, It is a welcome move as the state government is trying its best to end this border dispute.

When contacted, one of the traditional body chief, who requested anonymity said, Chyne is heading the Council with the support of the NPP members. He is speaking on their behalf. It is a big let down for the tribal people along the interstate border who are losing their land to Assam.

Leader of the Opposition Mukul Sangma of the TMC had earlier this month also cautioned the BJP-backed Meghalaya Democratic Alliance government not to be in a hurry in finalising the Memorandum of Understand' to resolve the 12 areas of difference with Assam.

I would like to appeal to the government to hold on, have more exhaustive understanding about this complex contentious issue before you decide to resolve it part by part, Sangma had said in the state legislature.