14 areas flooded in Dimapur, evacuations on 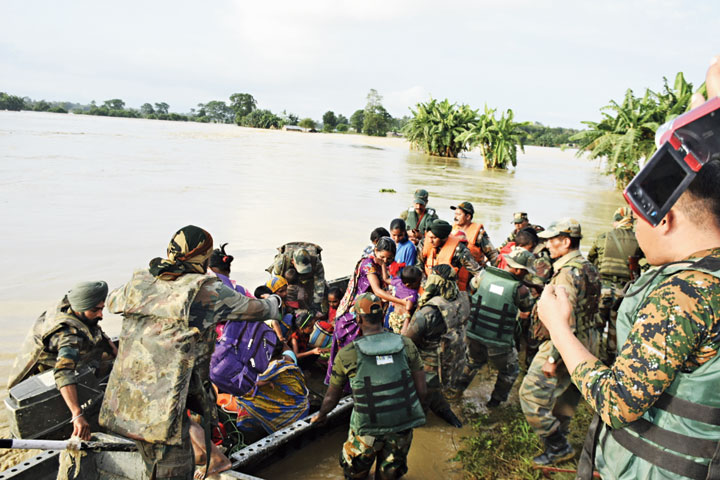 Incessant rain in the past three days flooded 14 locations in Dimapur district, leaving many families homeless and submerging several houses.

The report said the Dhansiri and Chathe rivers are swollen and flowing at dangerous levels blocking the flow of drainage and small streams, causing intense flooding in the adjoining areas.

Nagaland chief minister Neiphiu Rio, who is also the chairman of the Nagaland State Disaster Management Authority, visited the flood-affected colonies and villages, including Naharbari, Darogajan and Ekhyo Yan, to take stock of the situation on Sunday.

He handed over Rs 10 lakh to Dimapur deputy commissioner Kevekha Kevin Zehol, who is the chairman of Dimapur District Disaster Management Authority (DDMA), to be distributed as immediate relief in the affected areas.

The 5th Assam Rifles also provided medical aid and food packets to the displaced.The evacuated persons were shifted to Government Primary School Ekhyo Yan and provided essential commodities by the district administration and the DDMA.

The swelling waters of Dhansiri river washed away the recently inaugurated Tisthrongse rope bridge. One whole colony at Naharbari area has been flooded while flood waters have reached the government school in the area.

While Siethekema Basa village road is cut off, crops and houses have also been reported damaged at Selouphe and Khopanala villages.Seventy per cent of Thahekhu village has been completely submerged, affecting many houses. An estimated 100 people are also reportedly trapped in Domokhia.

The DDMA, SDRF, homeguards and civil defence have rescued marooned people in Tsithrongse village while the SDRF has pressed inflatable boats into service for search and rescue operations.