13 constituencies & a whole lot of factors 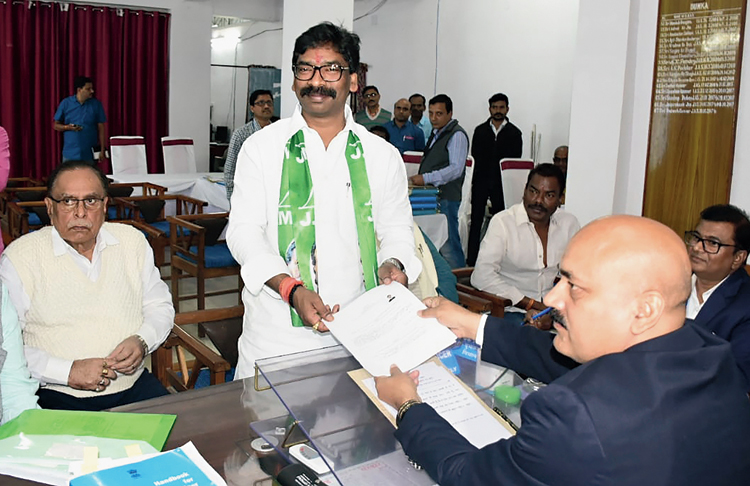 JMM executive president Hemant Soren, the chief ministerial candidate, files his nomination papers in Dumka on Friday. On Saturday, Prime Minister Narendra Modi urged people to vote in large numbers. For the first phase of voting to 13 seats on Saturday, 62.8 per cent votes were cast till 3pm
(PTI photo)
Our Correspondent   |   Ranchi   |   Published 30.11.19, 07:08 AM

A total of 37,83,055 voters in 4,585 polling booths will decide the fate of 189 candidates in the fray from 13 seats for the first phase of the state Assembly elections on Saturday.

The first phase, the starting gun for the five-phase race to a new Jharkhand government, is crucial for the BJP. In the last state polls in 2014, the ruling party had won six — Chatra, Gumla, Manika, Bishrampur, Chhatarpur and Garhwa — of the 13 seats of which four seats are reserved for Scheduled Tribes and three for Scheduled Tribes.

The Ajsu Party, which walked out of the BJP-led NDA alliance in the run-up to the elections, had won Lohardaga in 2014. However, the seat went to the Congress in the by-election where Sukhdeo Bhagat defeated the Ajsu Party candidate. Now Bhagat is contesting as the BJP candidate against state Congress president Rameshwar Oraon and the Ajsu Party’s Neru Shanti Bhagat.

Chamra Linda of the JMM had won from Bishunpur, and the JVM had won the Daltonganj and Latehar seats. But Babulal Marandi’s the party suffered post-electoral loss as JVM MLA from Daltonganj Alok Kumar Chaurasia joined the BJP along with five other JVM MLAs. The JVM’s Latehar MLA Prakash Ram is also contesting as the BJP nominee this time.

The Congress had won Panki, and the BSP had won Hussainabad. This time, the BSP’s winning candidate Kushwaha Shivpujan Mehta is contesting as the Ajsu Party nominee.

Bhanu Pratap Sahi, then of the Naujawan Sangharsh Morcha, had won Bhawanathpur. Now, he is the BJP candidate from that seat.

All the 13 seats are affected by Left-wing extremism. Almost all 13 seats are heading for triangular or quadrangular contests.

Kishore, as chief whip of the BJP in the Assembly, was known as a good defender for the government inside and outside of the House.

Technically speaking, the BJP is contesting 12 of the 13 seats as it has not fielded anyone from Hussainabad and has extended support to Independent candidate Vinod Singh.

The Ajsu Party contesting alone will lead to division of votes. Constituencies such as Lohardaga are considered strongholds of Sudesh Mahto’s party.

The JMM is contesting the elections in alliance with the Congress and the RJD. The party of Shibu and Hemant Soren is contesting Gumla, Bishunpur, Latehar and Garhwa. The Congress is contesting Manika, Daltonganj, Bishrampur, Lohardaga, Panki and Bhawanathpur. The RJD is fighting from Chhatarpur, Hussainabad and Chatra.

But the JVM contesting all 81 seats of the Assembly is expected to eat into the anti-government votes. Marandi’s party has a strong organisational base.

Both the BJP and the JMM-Congress-RJD camps claimed they would sweep the elections.

“We are contesting election on the agenda of the development,” said state BJP spokesperson Pratul Nath Shahdeo. “The 2014 parliamentary and Assembly elections and the 2019 Lok Sabha election results have shown that voters want a strong and stable government that can bring development.”

“At a time when chief minister Raghubar Das is nervous in his own constituency the BJP should forget about reclaiming Jharkhand once again. His cabinet minister is fighting against him and has accused Das of patronising corruption. The BJP deploying all its top leaders right from the Prime Minister for campaigning shows their nervousness,” said Thakur.

Neither Sonia Gandhi nor Priyanka Gandhi Vadra will campaign in Jharkhand, highly placed Congress sources said in New Delhi. But Rahul Gandhi, whose first public rally is scheduled in Simdega on December 2, will return to the state in later phases. However, there won’t be any intense campaign by the central leadership despite the morale-boosting outcomes in Maharashtra and Haryana.

Central Congress leaders said local leaders, assisted by Congressmen from neighbouring Bihar and Chhattisgarh, were managing the Jharkhand campaign on their own.

The BJP, on the other hand, has already launched a high-decibel campaign led by Prime Minister Narendra Modi and Union home minister Amit Shah.