Advertisement
Home / Jharkhand / Villagers, on a mission to save a 100-year-old pond, to move court against NHAI

Villagers, on a mission to save a 100-year-old pond, to move court against NHAI 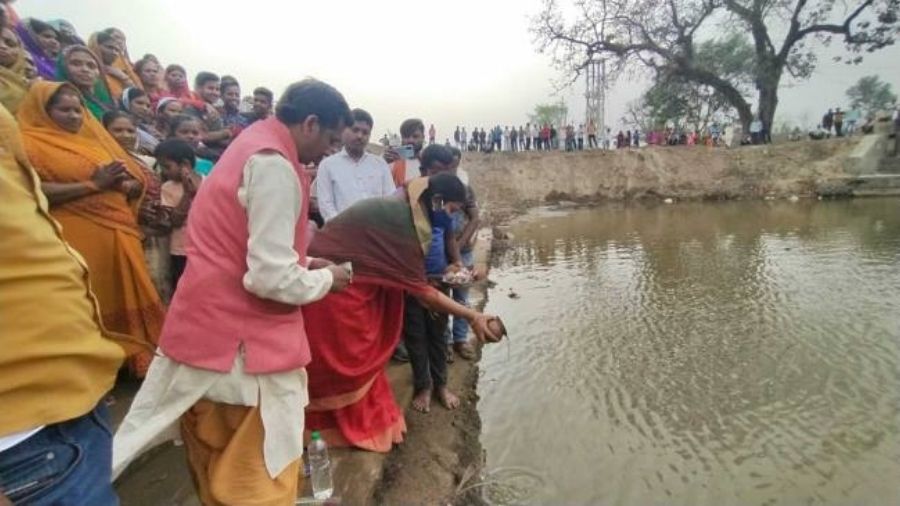 Villagers of Jhumri Charadih in the Koderma district on Tuesday said they will move Jharkhand High Court to save an old pond after the National Highways Authority of India  (NHAI) announced it will occupy a part of the reservoir for an ongoing project.

A team of village residents, led by AJSU’s Shalini Gupta, also met deputy commissioner of Koderma Ramesh Gholap and requested him to take action. Gholap assured them that he would talk to officials of the NHAI and those of the land acquisition department to solve the problem.

NHAI is working on a project to extend the Ranchi-Patna Highway (NH-31) and villagers complained that the authority suddenly started dumping waste bitumen in huge quantities in the pond which has been a lifeline for more than a dozen villages for the last 100 years by providing water for irrigation.

The villagers said that widening the highway is essential and they have been supportive of the project but protested when officials at the NHAI said that the pond was coming in their way and they will acquire a huge chunk of it to carry forward their work.

“When the NHAI have already acquired land on the other side, why are they after a pond which is a lifeline for humans and animals,” the villagers questioned.

On Gholap’s intervention, the authorities took out some of the waste on Tuesday, after which villagers performed a puja at the reservoir in order to ‘purify’ it.

“We will go to any extent, right from agitation to jail bharo abhiyan (fill the jails), to save the pond.. We have also formed Jhumri Bachao Sangharsh Samiti and will intensify our agitation in coming days if NHAI fails to listen to us,” the protesters said, after announcing their decision to go to the high court.

“We have informed the higher authorities about the issue,” an NHAI official told The Telegraph Online on condition of anonymity. The official said that the project head had also visited the site due to the reason and took stock of the land available at the other side of the road, and they were waiting for directions from higher authorities.