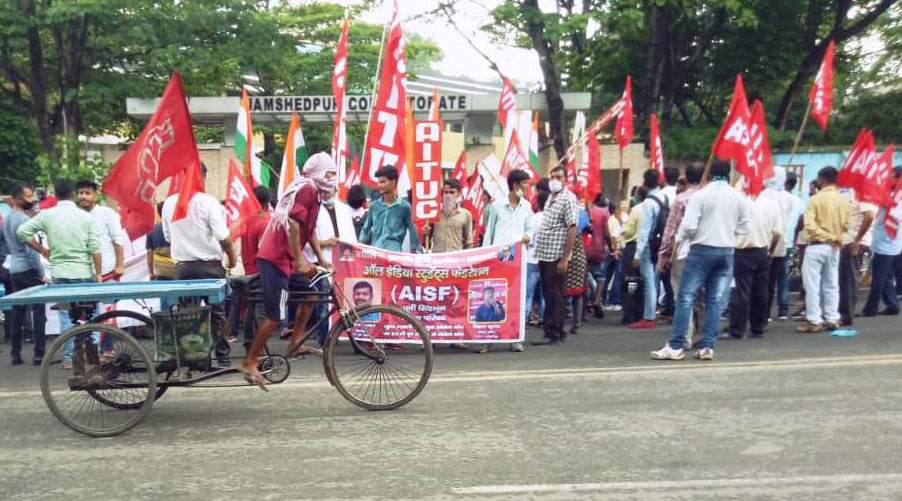 Over 300 members of various trade unions gathered at the collectorate here on Friday with flags and banners to protest against the reduction in provident fund interest rates but police dispersed them after about half an hour for violation of social distancing norms.

Most of these in the rally were wearing masks, but sources in the district administration said they pulled them down while shouting slogans displaying total disregard for health safety norms at a time when Jamshedpur is witnessing a steady rise in the number of Covid-19 cases.

"We are aware of the status of Covid-19 cases in Jamshedpur,” maintained Heman Chandra Tripathy, a senior AITUC member. “But we are equally concerned about the Centre's step of slashing PF interest rates from 8.65 per cent to 8.5 per cent recently.  We had no option than to register our protest by demonstrating in front of the deputy commissioner's office," he said.

The group, comprising members of the INTUC, AITUC and AISF, had first gathered at Ambagan Ground in Sakchi at 11am with flags and banners. From there they marched for about a kilometre to the collectorate.

The trade union members began shouting slogans around 11.30am. But it was only after the arrival of a magistrate that police began dispersing the crowd.

Additional district magistrate (law and order) Nand Kishore Lal said the protestors were dispersed as soon he reached the spot. “They have violated social distancing norms by assembling in a big number near the deputy commissioner’s office. The administration will register a case against them all,” he said.

Lal said no one had taken permission from the district administration for organising the protest. “I have asked officials to register a case against these people," he told The Telegraph Online.

As of 2 pm on Friday, the total number of Covid-19 cases in the East Singhbhum district was 452.

"There was a sudden rise in the Covid-19 cases as 45 people, including 19 CRPF jawans, tested positive late in the Thursday night," said district civil surgeon Rajendra Nath Jha.

Jha, who joined his new post only Wednesday, said that after shops and business establishments had reopened, the fear factor seemed to have vanished. “People should be more careful,” he said.