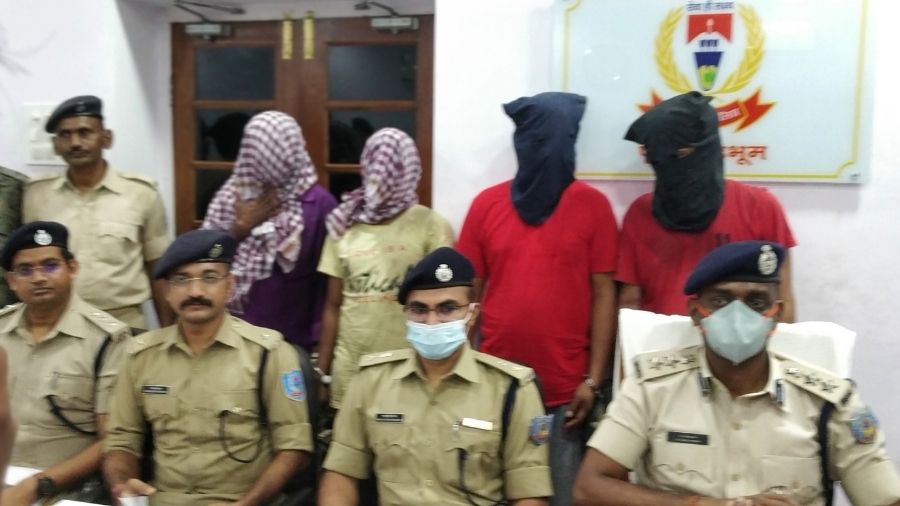 The Jamshedpur Police on Saturday busted a gang of criminals who was involved in stealing liquor stocks from licensed liquor shops in rural areas of the district and sell the stolen bottles to bootleggers in the steel city.

The arrest followed after one of the bootleggers was arrested from the city a week ago. The bootlegger spilled the beans about the gang which was operating in the rural areas like Potka, Jadugora and Kowali thana areas of the East Singhbhum district.

Those arrested were identified as Mohammad Afazuddin and Vikash Kumar, both 28-year-old, Fahim Alam (30) and Mohammad Islam (65), all residents of Jamshedpur.

Police have seized an SUV and a motorcycle that the accused would use in the burglaries, and Rs 21,000 cash from those arrested.

Revealing about the breakthrough, senior SP, M Tamil Vanan said the gang, led by Mohammad Islam had broken in in as many as half-a-dozen liquor shops in Potka, Jadugora and Kowali areas between December 30 to March 9, pulling a heist of Indian-made foreign liquor (IMFL) worth Rs 10 lakhs.

"As the modus operandi of all the burglary cases was the same, we concluded that a particular gang was involved in all these burglaries. A special team of police officials was set up to detect the gang. The team got a breakthrough a week ago when it nabbed a man selling IMFL bottles at throwaway prices. Following interrogation of the man, the special team came to know about the gang," said Vanan while addressing a press conference on Saturday evening.

The senior SP said though the bootlegger in police custody had divulged everything about the gang, including the whereabouts of the gang members. But all the criminals had fled the city.

"On Saturday, the special team got a tip off that one of the accused, Mohammad Fahim has returned home at Jugsalai. Getting the information, the police raided his house and arrested him. Within the next few hours, three more accused were arrested," the senior police officer said.

Vanan pointed out three to four more members of the gang are still absconding, adding that the efforts to arrest them is on.