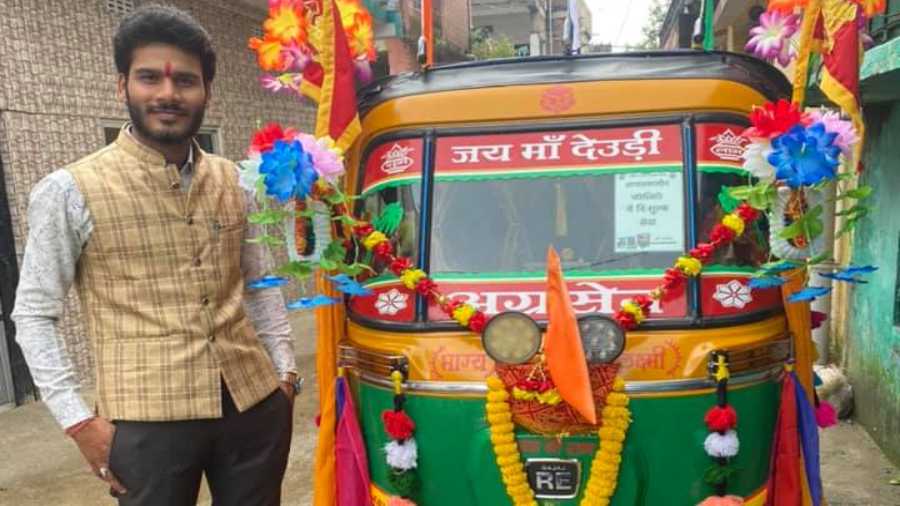 An auto-rickshaw driver from Ranchi is among a handful of Covid warriors who have received  salutations from the Union government for going out of their way to  help scores of people during the brutal second wave of the pandemic.

As India achieved the historic feat of having administered 100 crore Covid-19 vaccinations on Wednesday, the Union Ministry of Steel  released a 3.07-minute documentary (biopic) on Ravi Agarwal (21) as a thank you gesture for his efforts to save several lives in Ranchi by offering free auto rides to Covid patients.

“I am deeply humbled by this gesture of the Union government. I have been flooded by phone calls since last night about the video that was released on the   ministry's  twitter handle. But honestly, whatever I did was only with the intention of  helping the helpless,” remarked Ravi, who lives in Kokar and is currently pursuing his B.Com final year from Ram Lakhan Singh Yadav College while also working as a newspaper hawker.

Ravi is younger of  two siblings. His elder brother is currently searching for a job. Their parents are aged. “My father used to sell vegetables to run the family. But a few years ago, I asked him to stop, saying we would do the earning from now," said Ravi.

During the first wave of the pandemic, Ravi said he offered to distribute food free, buy and deliver ration to the needy and also supply medicines. “I did all that to do my bit for society at a time when everyone was stressed with the pandemic,” he said.

During the second wave of the pandemic, Ravi recalled, even Covid patients were finding it difficult to reach hospitals.

“It was because ambulances were scarce, or not willing to ferry people. All ambulance services were fleecing people by charging  exorbitant rates. That was when I decided to offer free rides to the medically hapless. I mentioned my number and pasted it on the auto and also posted it on my social media account,” he recalled.

Soon he was swamped with requests from all across Ranchi. "My intention was only to help people in and around my locality but I started getting calls from as far as 40-50km. I never declined  anyone," he said adding that even though he would get 350-400 calls he could help about 10 per cent of them, given his financial and logistical limitations.

The steel ministry also released a similar 3.22- min video on veteran doctor and Padmashree Shyama Prasad Mukherjee, a renowned name of Ranchi, who since he started  practising in 1966,  has been offering medical consultation to people only at Rs 5.