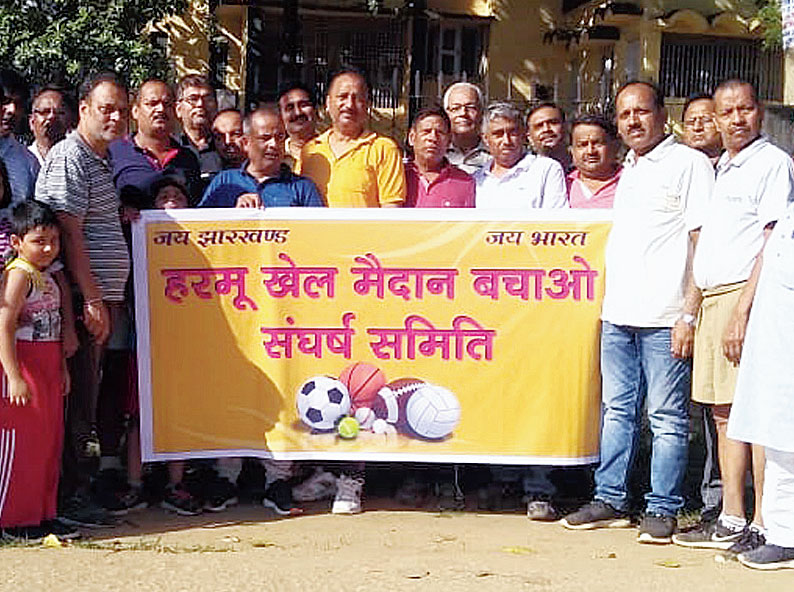 Mahendra Singh Dhoni practised his helicopter shots on this ground as a teenager. For many budding cricketers and footballers, Harmu grounds in Ranchi is home away from home. But of late, this open space is rarely left alone for players and morning walkers.

Unhappy over Harmu playground frequently used for non-sports activities, a section of morning walkers and Harmu residents on Sunday morning formed an organisation to try and convince authorities to let the grounds be used only for sports and walks.

After the organisation was formed, it was decided in its meeting that the committee would start its course of action by writing to urban development and sports ministers C.P. Singh, Amar Kumar Bauri, urban development secretary A.K. Singh and managing director of Jharkhand State Housing Board Braj Mohan Prasad.

President of the organisation Prasad, who earlier saved an open space near Patel Park allotted to a private school, told The Telegraph the organisation would meet every Sunday at 7am and create awareness among morning walkers about their aim. “Jharkhand has a lot of potential in sports but proper attention is not being paid to playgrounds. Harmu grounds, where cricket star Mahendra Singh Dhoni has played several matches as a youth, and which has nurtured more than 10 national players, is being used for non-sports activities,” he said.

He added social, political, religious and commercial events were organised here, which has harmed the ground. “Players get injured by nails, uneven surface and holes left in the wake of the events,” Prasad said.

Convener Arun Kumar Jha supported the fact saying function organisers host functions and leave without cleaning the ground. “I have to use manpower of Ranchi Municipal Corporation to maintain the ground. The housing board just collects fees but does not give a single penny for maintenance. Sportspersons and morning walkers are left complaining. Such an organisation is the need of the hour. The organisation is free from political interference as members are apolitical,” Jha said.

Nilesh Kumar Tigga, who train footballers every day, welcomed the development. “It’s true players get injured on a daily basis during practise, because holes dug to erect pandals are not plugged and nails on pandal grounds keep lying on the surface,” he said.