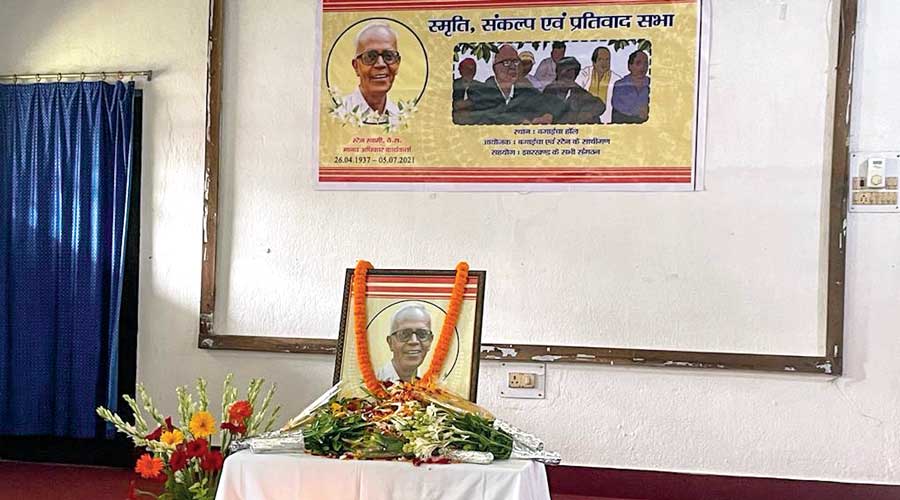 A silent resistance march was held in Jamshedpur on Thursday and a condolence meeting was organised in Ranchi to decry the custodial death of octogenarian Jesuit priest Father Stan Swamy and intensify the agitation for repeal of the stringent Unlawful Activities (Prevention) Act (UAPA).

Fr Stan, who passed away in a Mumbai hospital on Monday while waiting for bail in judicial custody for eight months, had challenged the UAPA in Bombay High Court.

Over 100 social activists, academics, trade union activists and tribal leaders took part in the silent resistance march wearing black masks and passed through different parts of Sakchi, Jamshedpur, before gathering at a local roundabout in the afternoon.

“Father Stan Swamy, who had spent all his life raising his voice for the tribals and the oppressed, was killed in custody by the fascist government at the Centre through its wing, the NIA, and the callousness of the Maharashtra prison authorities. We demand stern punishment for all those who conspired to kill an elderly person who had been raising his voice for the rights of tribals,” said Madan Mohan, a leader of the Visthapith Mukti Vahini, an organisation fighting for the cause of the villagers displaced by the Subernarekha Multipurpose Project.

“The government should not think that killing Fr Swamy would silence the movement; in fact it would only give more fire to the movement. We would not stop till the draconian UAPA is repealed,” he added.

The UAPA, under which Fr Stan had been arrested last year in connection with the Elgar Parishad-Maoist links case, allows for detention without trial for six months.

Jawaharlal Nehru University alumni and tribal rights leader Deepak Ranjeet said the time was ripe for a nationwide agitation to release all human rights activists and journalists, including Siddique Kappan, arrested under the UAPA and the sedition law on flimsy grounds.

“While paying tribute to Fr Stan Swamy, it is time for us to take forward his mission and vision by empowering tribals and the marginalised, making them aware of their rights and also exerting pressure for the repeal of the UAPA under which he was arrested and ultimately killed in custody,” Kujur said.

The attendees decided to take out a rally on July 15 demanding the repeal of the UAPA and also meet the chief minister to seek the enactment of a law preventing the NIA from arresting anybody in Fifth Schedule areas without the consent of the gram sabha concerned.

The Provincial of the Jamshedpur Jesuit province, Father Jerome Cutinha, said the ashes of Fr Stan arrived at Ranchi on Thursday evening in a flight and would be kept at Bagaicha and also taken to various other places in Jharkhand.

“Since it is not possible for many Jesuits and others to come to Ranchi to pay their last respects to Fr Stan Swamy, we will be taking the ashes to different parts of Jharkhand, including Jamshedpur, Dhanbad, Chaibasa and Gumla, over a month. On August 3, the ashes will be buried at the Jamshedpur graveyard in Mango,” Fr Jerome said.

Fr Joseph Xavier, the director of ISI Bangalore, had earlier carried the ashes of Fr Stan across several parts of south India for people to pay their last respects.