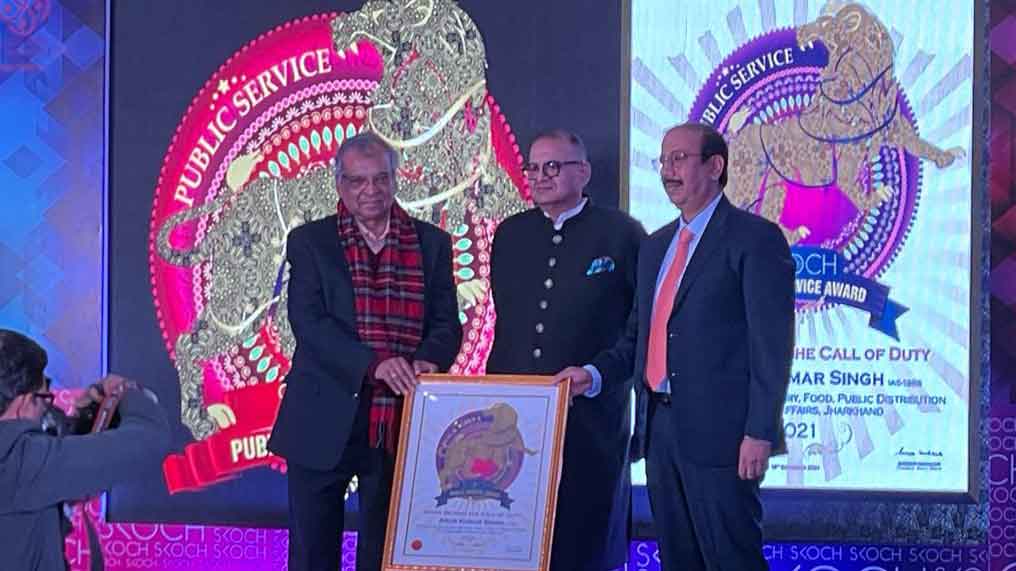 The additional chief secretary in Jharkhand's health, food and public distribution department, Arun Kumar Singh, was  conferred with the Skoch Award for public service at a function organised in New Delhi on Saturday. The award is bestowed by the Skoch Group, a  think tank dealing with socio-economic issues with a focus on inclusive growth since 1997.

As per a letter written by Sameer Kochar, president of the Skoch Foundation,  the senior IAS officer of  Jharkhand cadre was selected for the award for his innovative ideas like  construction of skill development centres, community toilets which has made cities of Jharkhand clean and citizen-friendly.

“We have observed and admired your work for long across the domains of industrial development, commercial taxes, tourism, public works department, agriculture, water resources, urban development,  food and public distribution, health and family welfare. They have been nationally acknowledged in the form of various awards and citations. Krishi Karman Award, Swachh Bharat Award and Amrut Awards are to name a few,” the letter states.

“You have conceptualised and assisted the Jharkhand government in settings up so many institutions  like JARDCL, SHAJ, JIIDCO, SPIADA , JIADA JINFRA JHARCRAFT, JUIDCO, SMART CITY, JUPMI, KUSUM, JATI are some of them. Particularly noteworthy has been your exemplary, professional and worth emulating handling of the critical health department during the dangerous second wave of Covid and food and civil supplies including public distribution system and supply chain management during the first wave of Covid,” the letter added.

The letter also recalled the senior bureaucrat's valuable contribution in the development and maintenance of law and order as a collector in Jehanabad,  Nalanda (in erstwhile Bihar), Hazaribagh and Deoghar districts (in Jharkhand).