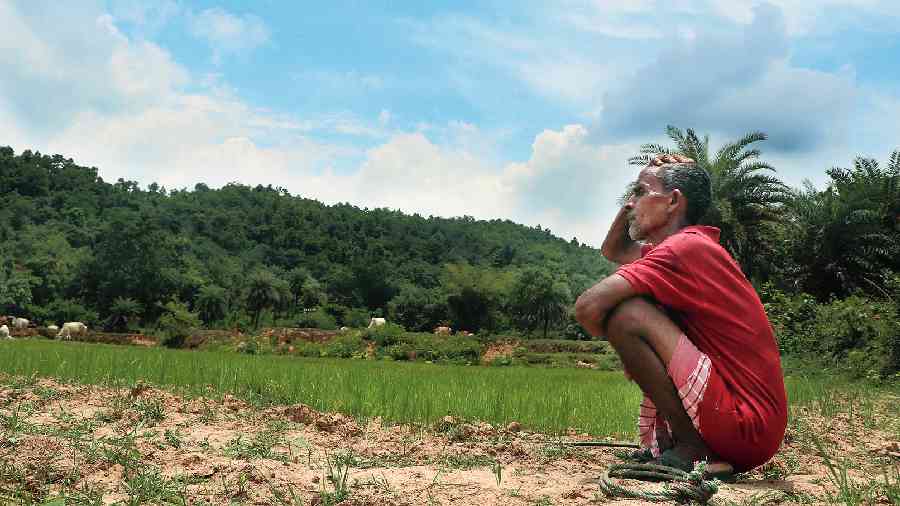 A farmer sits on his parched field in Dhanbad. The Kisan Credit Card scheme with an additional three per cent interest waiver may bring some relief to the farmers of Jharkhand which is staring at a drought-like situation.
Shabbir Hussain
Animesh Bisoee   |   Jamshedpur   |   Published 29.09.22, 01:25 AM

Jharkhand, staring at a drought-like situation, has set an ambitious target of linking 25 lakh farmers with the Kisan Credit Card (KCC) scheme by March 2023.

The Kisan Credit Card (KCC) loan is available to farmers at a seven per cent interest rate, with a waiver of three per cent of the interest by the Centre, when the loan is repaid within the time limit.

According to information shared by the agriculture department through a release issued by the state public relation department on Tuesday evening, the number of KCC beneficiary farmers as on September 15, 2022, in Jharkhand stood at 19,18,511, an addition of 5,34,331 since September 2021.

“We have received instruction from the chief minister (Hemant Soren) for a continuous thrust in the process of linking the farmers with the Kisan Credit Card scheme which has proven to be a blessing for the farmers of the state by providing them loans at a simplified rate. It has established itself as a boon for the farmers, who are not only getting loans that aid their agrarian practices but also liberate them from the clutches of the moneylenders,” added Nisha Oraon.

According to the statistics shared by the public relations department, tremendous improvement has been witnessed in the agriculture loan segment.

“So far a sanction of more than Rs 900 crore worth of loans by the present government, whereas only Rs 409 crore was disbursed from the formation of the state till December 2019,” the release stated.

So far, the KCC of 8,96,108 farmers has been achieved under the campaign by organising camps at the panchayat level.

“The Sarkar Apke Dwaar (Government at your doorstep) campaign which was started last year will commence from October this year and farmers can avail of the benefits of KCC. Currently, a door-to-door campaign is being run to achieve the set goals besides the KCC camps,” the release said.