2 injured in scuffle near CM's residence 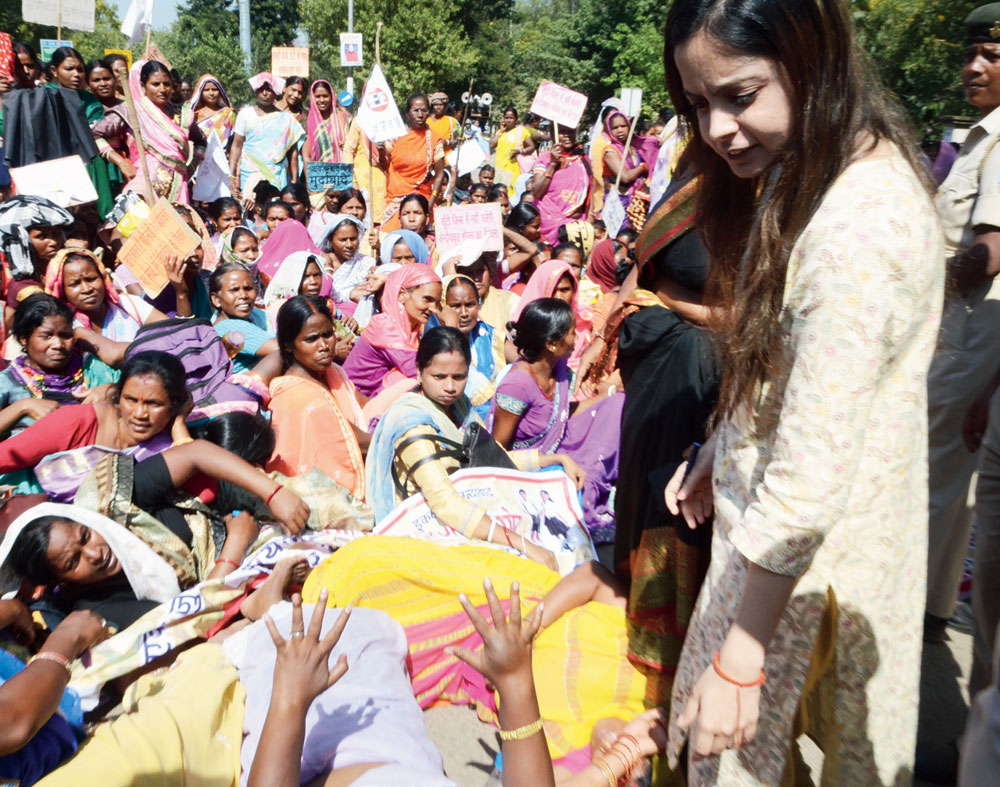 At least two midday meal workers were injured on Tuesday when police used batons near the state guest house in Morabadi to thwart their attempt to gherao the chief minister’s residence on Kanke Road, a kilometre away, to push for better pay and benefits.

The hour-long protest from noon was quelled following the intervention of Sadar SDO Garima Singh. One of the injured protesters was sent to Ranchi Sadar Hospital.

The services of several hundred midday meal cooks and co-ordinators were terminated after the job of preparing lunch for government school students was handed over to voluntary organisations such as Akshay Patra Foundation and Iskcon in many areas of the state. Merger of schools also rendered many jobless.

The 500-odd agitators, mostly women, were demanding restoration of their services, monthly remuneration of Rs 18,000 in tune with a PM announcement and benefits on a par with Grade IV government employees like it happens in Tamil Nadu. Currently, midday meal cook receive a paltry Rs 1,500 a month for 10 months a year.

Under the aegis of Jharkhand Pradesh Vidyalaya Rasoiya, Sanyojika Adhyaksh Sangh, the midday meal workers embarked on their indefinite “ghera dalo, dera dalo” campaign near Raj Bhavan on September 25. On Tuesday, they assembled near Mahatma Gandhi’s statue in Morabadi and proceeded towards Kanke Road while CM Raghubar Das was holding a meeting with stakeholders of a proposed food and agriculture summit in Delhi.

A fledgling group of around 150 protesters, armed with placards, tried to sneak through bylanes unnoticed, but were stopped by police nonetheless near the state guest house. A scuffle ensued and police used “mild lathicharge”. While one Radhika Devi injured her right hand fingers, another woman fainted and was rushed to hospital. Thereafter, the protesters lay down on the road and raised slogans.

SDO Singh, who reached the spot and reasoned with the agitating women, said the protesters were detained on Ranchi University premises until the matter was resolved.

“A delegation of seven was sent to the CM’s residence to talk to his representative. The situation is under control. A few protesters may have suffered minor injuries during the scuffle, but there is no official record,” the SDO said while unconfirmed reports put the number of injured at 25.

Rasoiya Sangh president Ajeet Prajapati said they had received an appointment to meet CM Das on October 12, but added that he was doubtful if talks would yield result.

If the talks fail, midday meal workers across the state are expected to go on an indefinite strike from Friday and the day after block important thoroughfares in the capital.

“Our campaign may be causing inconveniences to commoners in the run-up to festivities, but we are helpless. More than 25 members were injured during today’s protests. The government must take prompt action to avert untoward incidents,” he added.