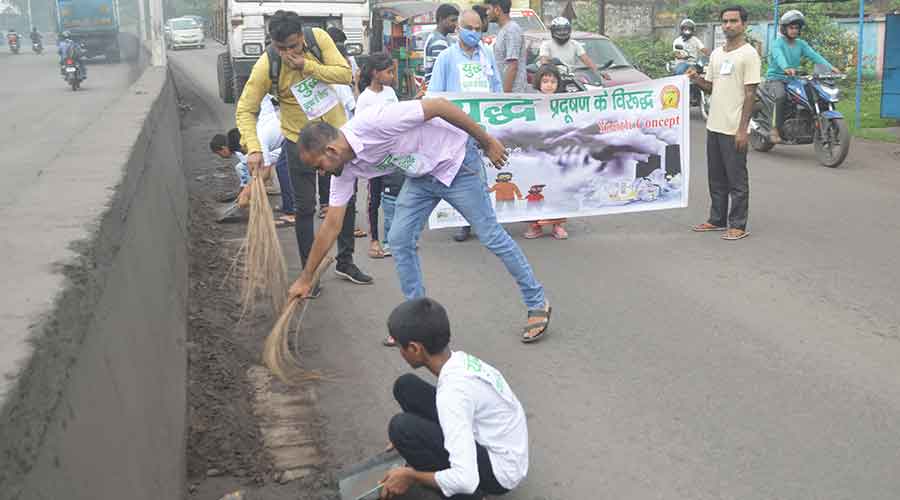 A group of over two dozen residents of Jharia on Thursday launched a series of agitations, titled Yuddh-pradushan ke viruddh (war against pollution) to protest against the dangerous levels of pollution and lack of insensitivity of the mining company BCCL and Dhanbad Municipal Corporation officials.

The group of social activists, environmentalists, former councilors, teachers and school students began the agitation at around 11 am by congregating near the Katras More, one of most polluted traffic squares of the town, and marching upto the BCCL Bastacola area headquarters, Vikash Bhavan.

The agitators who were holding brooms and dustpans in their hands also cleaned the thick layer of coal dust and mud deposited on the road side as a  mark of protest against the lack of apathy of authorities towards the pollution taking a toll on the health of common people.

Talking to The Telegraph Online on Thursday, Murari Sharma, an octogenarian activist of Jharia who led the march being the senior most among all the protesters, said, “Rampant mining being carried out by coal company BCCL and its private contractors in gross disregard of laid norms, transport of coal in overloaded trucks and lorries are chocking the breath of common residents as people are becoming victim of, allergic rhinitis, asthma, bronchitis, tuberculosis etc.”

“The gross disregard towards the norms can be assumed from the fact that large mountains of earth, soil, sand and dust dug out from the ground for coal excavation have been deposited very near to the main road in Jharia endangering the life of lakhs of people passing through the road,” said Sharma who is also the acting president of Jharia Coalfield Bachao Samiti, a frontal organisation of local residents of Jharia.

Environmentalist Akhlaque Ahmad who is also a resident of adjoining locality near Katras More said, “We are continuously raising the issue of pollution with the BCCL authorities for several years and during our talks with the local management of General Manager of Bastacola, Soumen Chatterjee, promises of a whole host of measures were made, including proper washing of the wheels of coal transporting vehicles before coming out of mining areas in order to clear the coal dust layers deposited in wheels.”

“Not only this, but the BCCL authorities also promised coal transport in covered vehicles only besides regular water sprinkling on adjoining roads, but all these promises proved hollow as nothing materialised on ground till date,” said Ahmad.

“None of the steps required for mitigating pollution including the regular operation of dust sweeping machines for cleaning roads, laying of paver blocks on road side and green walling of colonies by carrying out plantation as promised under the National Clean Air Programme (NCAP) have been implemented by Dhanbad Municipal Corporation leading to the aggravating of pollution situation,” he said and added that they will continue their agitation till the authorities come out of their slumber.