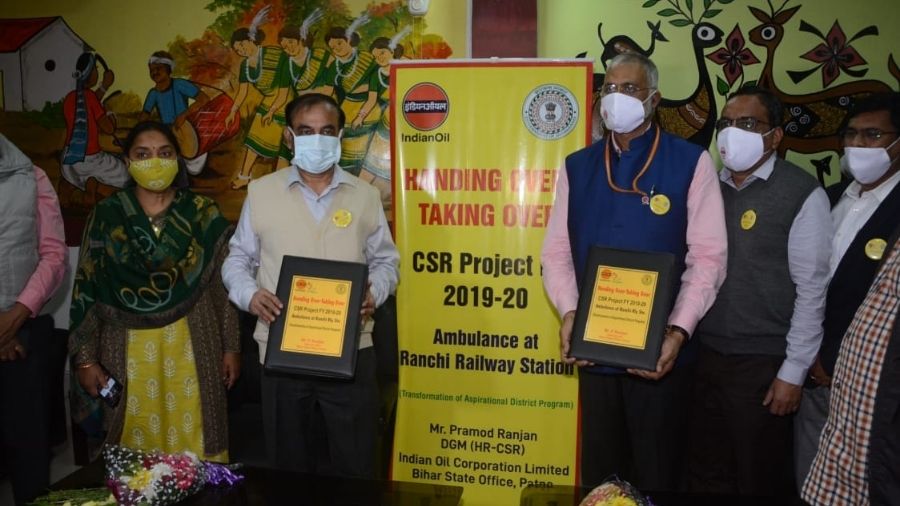 Officials of Indian Oil Corporation and district administration at the inauguration of an ambulance service at Ranchi railway station on Tuesday.
Telegraph Picture
Our Correspondent   |   Ranchi   |   Published 09.12.20, 09:41 PM

Ranchi district administration has signed an MoU with Indian Oil Corporation for setting up state-of-art labour rooms at primary health centres (PHC) in Nagri and Kuchu on the outskirts of the capital to facilitate safe institutional deliveries in rural areas as part of its endeavour to ramp up government health facilities.

At a formal function on Tuesday evening, the oil PSU committed to initially spend Rs 10 lakh for the project under its corporate social responsibility (CSR) activities, officials said.

Ranchi deputy commissioner Chhavi Ranjan said the health has been identified as one of the core sectors by IOC to utilise CSR funds. “Health and education are two priority sectors identified by the district administration as CSR activities. Last month, at a meeting with representatives of private and public sector companies, we had spoken of our focus areas and asked them to channelise CSR funds accordingly,” he said.

Ranjan said the administration had originally planned to set up modern labour labours in as many as four PHCs in the district. “But we are initially starting with two centres. We hope to get further cooperation from IOC for the remaining two PHCs in the coming months,” he said.

IOC DGM Pramod Ranjan said they have been working with the district administration on various projects in Ranchi, which has been classified as an aspirational district by Niti Aayog.

“The recent tie-up is only an extension of the ongoing cooperation,” he said,  adding that last week, IOC donated an ambulance to the district administration which will be stationed at Ranchi railway station, offering 24/7 free service to the needy.

Ranchi civil surgeon VB Prasad said that under the aspirational district programme the district administration had signed an MoU with IOC in January for launching 24/7 ambulance services at the railway station. “We are starting with one ambulance,” he noted, adding that the ambulance would be under the care of the district civil surgeon’s office.

Notably, the state health department is also focusing on strengthening basic health infrastructure at the grassroots level by roping in various public and private entities to run facilities and tide over the reeling crisis of manpower and resources.

Taking the first step, the state chapter of the National Health Mission (NHM) on December 1 handed over the overall operation of a PHC in Chirkunda in Dhanbad district to Ranchi NGO Citizens Foundation. Health department officials maintained that NHM had signed an MoU with the NGO for taking care of 11 PHCs across six districts in the state.