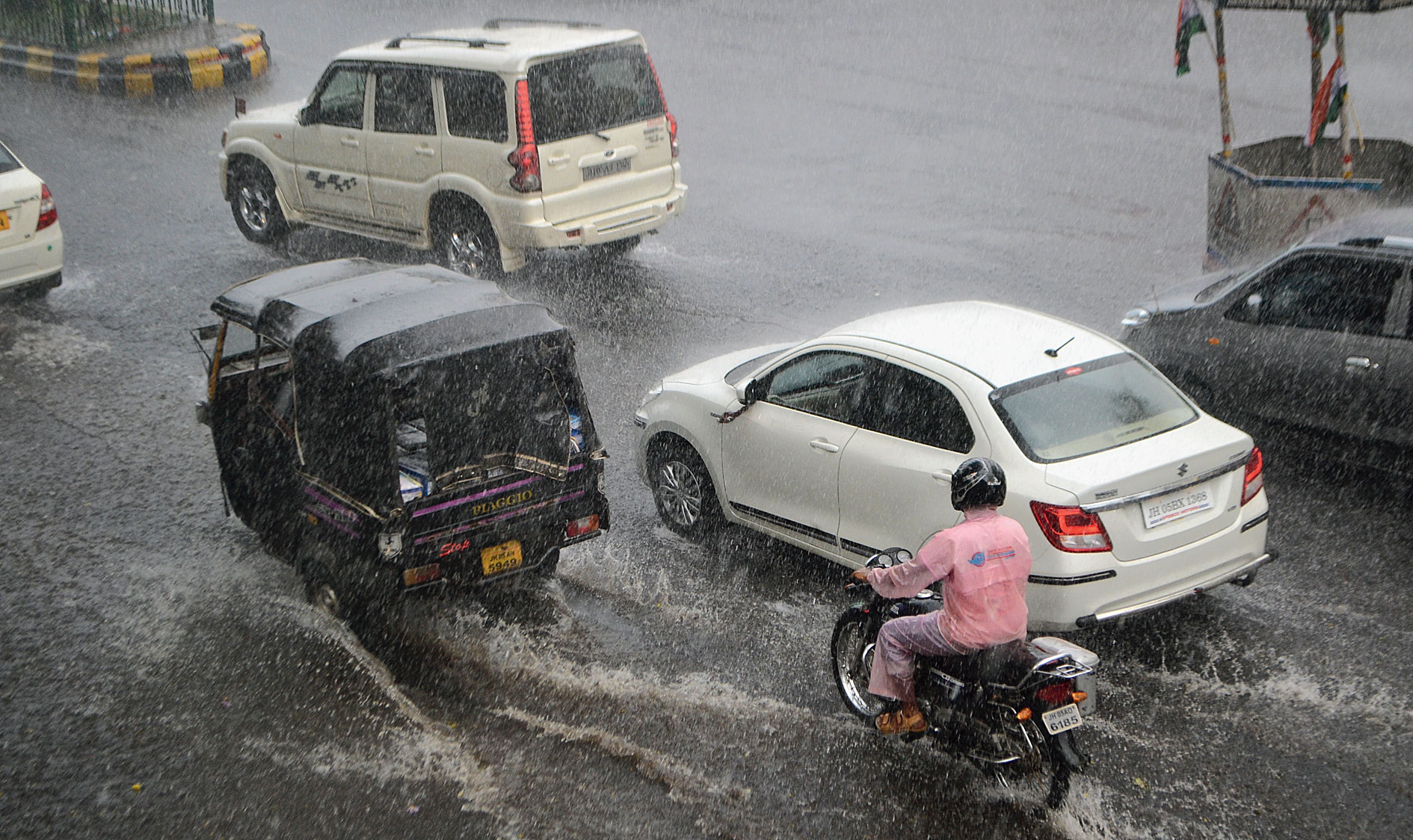 Commuters brave a downpour at Bistupur in Jamshedpur on Tuesday.
Picture by Bhola Prasad
Our Special Correspondent   |   Jamshedpur   |   Published 06.08.19, 09:20 PM

Several parts of the state, especially those in its southern, central and western regions, are expected to experience heavy to very heavy rainfall in the next 24 hours, courtesy a depression over the Bay of Bengal.

Both the Ranchi and Calcutta centres of the India Meteorological Department (IMD) on Tuesday issued downpour alerts in their bulletins.

“The low-pressure area that was hovering over the north Bay of Bengal has intensified into a depression and lay centred around 160km southeast of Balasore (Odisha) and about 130km south-east of Digha (Bengal). Under its influence, several parts of Jharkhand will get heavy rainfall in the next 24 hours,” said R.S. Sharma, a senior Met scientist at the IMD’s Ranchi centre.

He said the depression would intensify into a deep depression as it moved north-westwards across Odisha and Bengal coasts over the next 48 hours.

“We believe the depression will result in heavy to very heavy rainfall in several places across the state in the next 24 hours,” he added.

The monsoon trough was on Tuesday passing through Ganganagar, Hissar, Mainpuri, Mirzapur, Ranchi, Jamshedpur and northwest Bay of Bengal, extending up to 1.5km above mean sea level.

“The depression is expected to weaken only after the next 48 hours,” said a duty officer, adding that several districts of Jharkhand were expected to experience a good spell of showers.

The showers during the next two days would help in reducing the monsoon deficit, which on Tuesday was at 40 per cent. Met data show that the state has received 352.5mm of rainfall so far against an average normal of 587.5mm.

Weathermen said around 50 per cent Met stations in southern and central Jharkhand reported showers on Tuesday.

At some places the rainfall was accompanied by winds at 15kmph.

The local Met observatory in Jamshedpur recorded around 20mm of rain while several places in Ranchi and its outskirts recorded rainfall of around 5mm from 8.30am on Monday to 8.30am on Tuesday. Simdega recorded 70mm while Dhanbad experienced 40mm of rain. Palamau district headquarters Daltonganj recorded 30mm of rain while Chakradharpur, Chaibasa (both in West Singhbhum), Ramgarh, Chandil (in Seraikela-Kharsawan) and Ghatshila (in East Singhbhum) witnessed 10mm of rain each.