Roadwork suspended to allow for departmental probe into construction 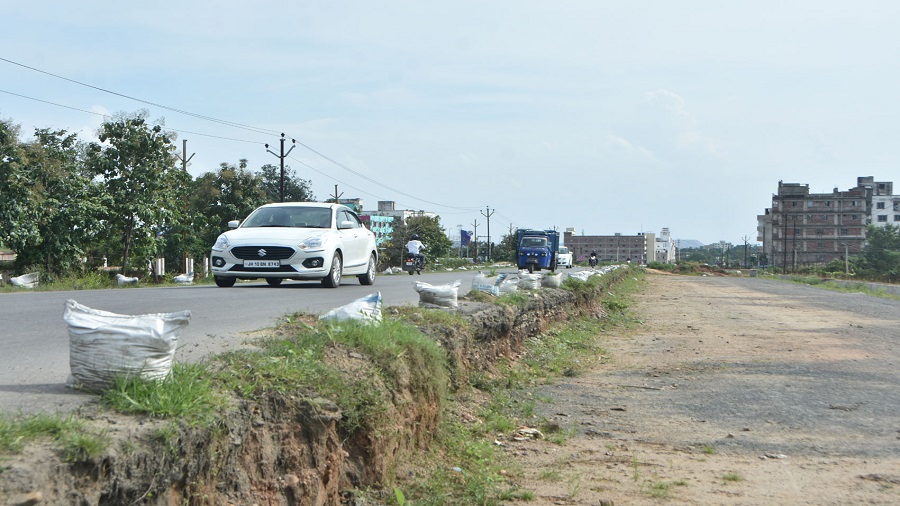 The Kako Math Gol Building road, one of the finest in Dhanbad, connecting the town with places like Katras and Baghmara, has turned into one of the most dangerous roads within two months, due to the suspension of ongoing roadwork along a 19km stretch.

The construction of the road by the State Highway Authority of Jharkhand began in 2019, following which work and was suspended due to the coronavirus pandemic induced lockdown.

It resumed after the relaxation allowed by the central government on April 20, but the work was suspended again by June 19 in the name of a departmental probe in its construction.

“I regularly use the road for visiting Katras for business purposes and for over two months, I pray to God for my safety every time before using the road. Digging being carried on for road broadening, and the existing concrete road and suspension of work midway has rendered it completely unsafe,” said Rajesh Kumar Gupta, a book shop owner of the Purana Bazar locality of Dhanbad, while talking to The Telegraph Online on Wednesday.

“One may feel the risk of falling into the dug-out part when a truck comes from the other side at high speed. The area is five to six feet lower than the road surface,” said Gupta and added that the road was once the finest in the district.

It was known for its greenery, and people would choose this road to travel to Baghmara, as other roads like the Kendua-Karkend were not popular due to pollution and other causes.

“We will meet the district administration authorities soon demanding either the resumption of construction work or putting safety measures like levelling the furrowed road to avoid accidents,” said Gupta.

Echoing sentiments with Gupta, another trader of Bartand area of Dhanbad, Madhurendra Singh, said the safety of the people should be of paramount importance to any government.

“With people falling into a large number of ditches all around the road, the area has turned into a virtual death zone,” he said.

“A large number of heavy vehicles passing through the road, which also serves as a by-pass for the town, further increases the possibility of accidents” said Singh.

Sandbags are placed in at some places to demarcate the barrier between the existing concrete road and the adjoining dug-out areas.

Singh said these are far too inadequate to ensure any safety against vehicles falling into the low-lying areas.

State Highway Authority of Jharkhand, in two parts, is carrying out the construction of a new eight-lane road having the provisions of a two-lane service road and a cycle track on both sides.

The project includes the 11.70km stretch from Kako Math in Katras to Binod Bihari Mahto Chowk in Dhanbad, being constructed through Tribeni Construction Ltd of Guwahati in Assam.