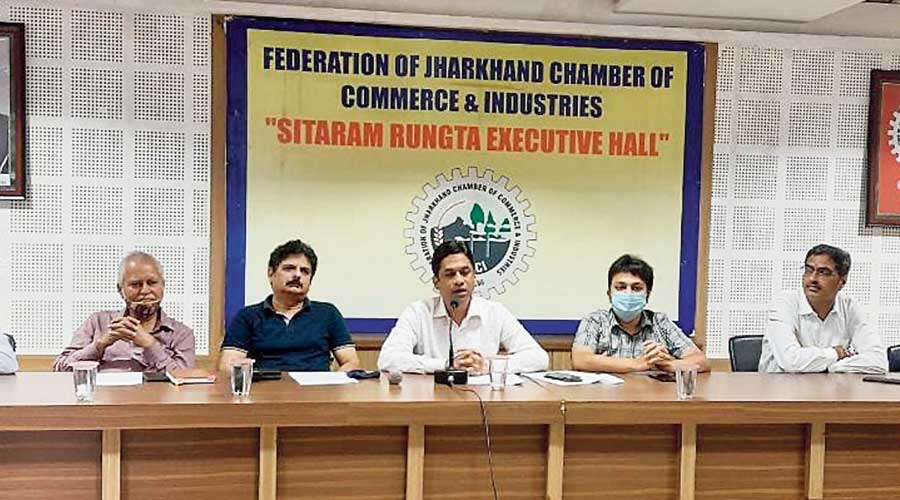 The Jharkhand government should identify the lapses in its style of functioning in the industrial development of the state and also rectify those.

The office bearers of the state’s apex trade body, Federation of Jharkhand Chamber of Commerce and Industries (FJCCI), said this while addressing the media at Chamber Bhavan on Friday evening.

“Attempts were made even earlier but those failed because of these lapses,” said FJCCI president Praveen Jain Chhabra, adding there was a need for a change if the government was serious in bringing in investments in the state.

The traders’ representatives echoed what some of the industrialists had told The Telegraph a few days ago that this paper published last Monday.

“We all had seen Momentum Jharkhand that failed but the government didn’t review the reasons behind the failure,” added Ajay Bhandari, reminding the fate of the global investment summit the BJP government led by Raghubar Das had organised in Ranchi in February 2017 and later declared investments worth Rs 3 lakh crore would come to the state.

“Satisfaction of customers is the best advertisement,” said Chhabra, adding the investors would come to the state only when they would be assured about the progressive growth of the industrial units they plan to set up.

Instead of improvement, the industrial environment continued to be gloomy in the state, he further said, adding the same could be seen in almost all spheres, be it electricity or pollution.

“I’m planning to expand my existing unit in Hazaribagh but the state pollution control board is yet to give me ‘consent to establish’ though I applied long ago,” alleged Sunil Agarwal who was present at the meeting.

The state of renewal of industrial license is no different, they further alleged, adding the few running units would also be forced to down shutter if the state of affairs continued like this.

“Not only that, those who were allotted plots for industrial purposes in certain parts of the state were still awaiting possession,” Chhabra alleged, giving example of Santhal Pargana Industrial Area Development Authority at Debipur in Dumka.

“The entrepreneurs were allowed 81 plots in that area two years ago but they are yet to get possession of those,” he informed.

“Of the total 360 units in Tipudana Industrial Area of Ranchi, about 200 are lying idle,” added its president Surendra Prasad Singh, giving example of the sorry state of affairs.

The FJCCI office bearers expressed doubt if the industries secretary was aware of the pitiable situation, adding she never visited the industrial area during the past one year she had been in charge of the department.

Dinesh Sarangi sits on a dharna

During the first day of the monsoon session of the Jharkhand Assembly on Friday, health minister and former BJP MLA Dr Dinesh Sarangi sat on a dharna (picture above) on issues related to medical compensation of former MLAs and MLAs, withdrawal of non-financed education policy etc. He lifted the agitation on the assurance of parliamentary affairs minister Alamgir Alam to look into the demands.

Speaker Rabindra Nath Mahto lauded the performance of Indians in the Tokyo Olympics and passed a condolence motion for those dignitaries, MLAs, and frontline workers who had died during the period between the previous session and the monsoon session.

The House was adjourned till 11am on Monday.

The monsoon session  will continue till September 9.