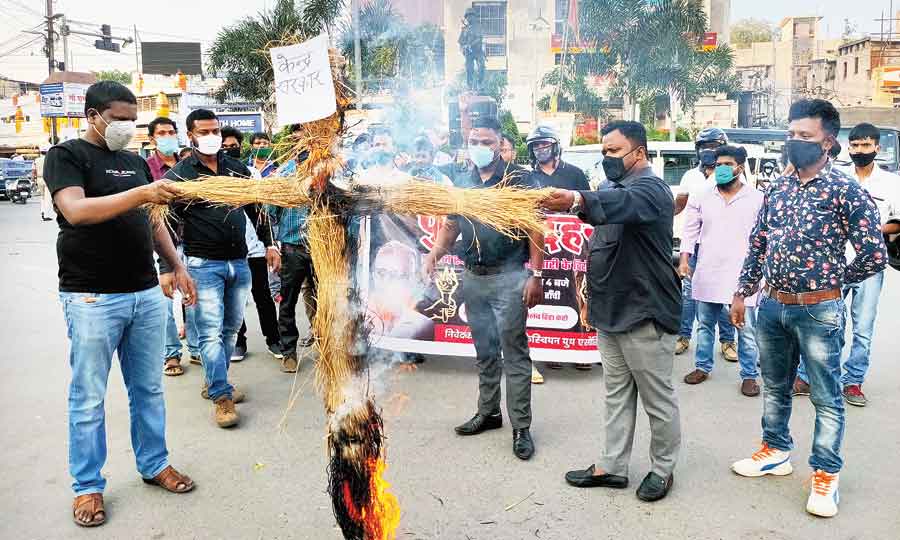 The show of solidarity with octogenarian Jesuit priest, Father Stan Swamy, who was arrested by the NIA near Ranchi on October 8 and jailed for alleged Maoist links, continued on Tuesday in Jharkhand.

Nearly 60 representatives of people’s organisations and tribal activists resumed their hunger strike near tribal icon Birsa Munda’s memorial at Kokar in Ranchi from 11am on Tuesday, while around 50 youths under the banner of Jharkhand Christian Youth Association (JCYA) burnt the effigy of the central government at Albert Ekka Chowk as a mark of protest against the arrest.

“Elderly (83-year-old) Fr Stan Swamy was being hounded by the NIA for the last two years in connection with the Bhima Koregaon case, though he has denied being present at the spot during the incident. The investigating agencies during these years have not been able to find anything concrete on his involvement in the incident but are now claiming that he is a Maoist sympathiser. The reality is that Fr Swamy, who has several health complications, had been fighting for rights of tribals, poor, Dalits and marginalised for decades. The NIA could have questioned Stan Swamy at Ranchi itself. But in line with a new trend set by the current BJP government in silencing voices of dissent raised by activists through police or central agencies, Fr Swamy was forcibly taken from his house at night to Mumbai amid the pandemic,” said JCYA president Kuldeep Tirkey. He demanded immediate release of Fr Swamy.

He said that youths would be forming a human chain between Albert Ekka Chowk and Kantatoli (a distance of over 4km) on October 16 to demand immediate release of the Jesuit priest.

“We would hold a meeting of representatives of various people’s organisations this evening at Ranchi and chalk out a strategy for holding a demonstration demanding the release of Fr Swamy. We have plans to meet different MLAs of the state and convince them of demanding the release of Fr Swamy,” said Aloka Kujur, a member of Jharkhand Janadhikar Mahasabha and women’s rights advocate, who joined the hunger strike in Ranchi.

Meanwhile, after Jharkhand chief minister Hemant Soren condemned the arrest, his Kerala counterpart Pinarayi Vijayan also pointed fingers at the role of the investigating agency in arresting the rights activist. In a Facebook post on Monday night, Vijayan demanded justice for Fr Swamy. “He questioned the breach of democratic values of tribals. To view this as a crime doesn’t befit the constitution. Father Stan Swamy has been working among tribals for decades. It has already been alleged that the move against him is to suppress voices of dissent. His arrest and imprisonment is regretful. He should get justice,” the post said.

“The allegation that investigation agencies are used for wrong intentions should be seriously examined,” it added.

Vijayan also expressed concern over the health of the ailing Fr Swamy.

There were protests across the country against the arrest of Fr Swamy who is currently in custody at Taloja Central Prison in Mumbai. There were protests on Monday near Jantar Mantar in Delhi with prominent human rights activists such as Shabanam Hashmi, Harsh Mander and Apoorvanand Jha addressing the gathering. Protests also took place on Monday in Guwahati (Assam), Bangalore (Karnataka), Kerala, Patna (Bihar) and in Trichy (Tamil Nadu), the birthplace of Fr Swamy.