Bureaucrat summoned senior officer to his office, asked him to apologise to wife, say policemen 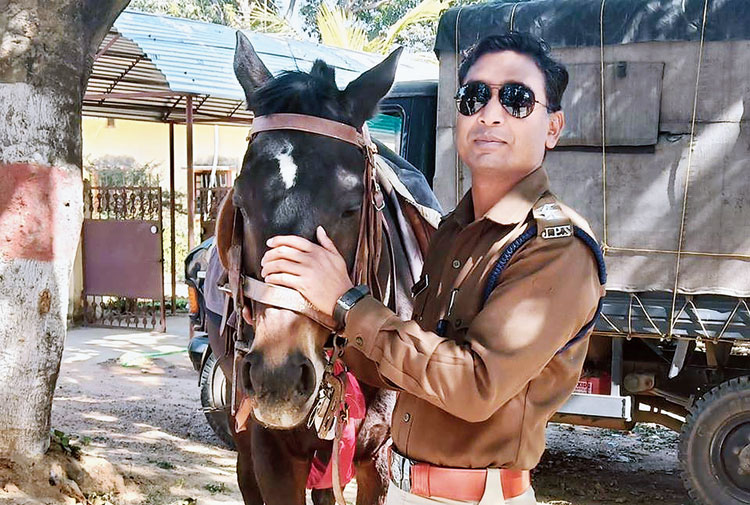 Traffic DSP traffic Ranjit Lakra’s transfer has kicked up a controversy with a section of police claiming the officer was being punished for having hauled up for traffic violation a car in which the wife of a senior government official was travelling.

The driver of the car (JH-01 CF-2083) wasn’t wearing a seatbelt and was talking on the mobile. He wasn’t carrying his licence too. Ultimately, he was fined Rs 600 after policemen, who were on duty, had an altercation with Anita Singh, the wife of urban development secretary Ajoy Kumar Singh.

Calls and WhatsApp messages from The Telegraph to Ajoy Singh went unanswered.

The incident occurred on February 5 when the police were carrying out a week-long traffic awareness drive.

“We stopped the car, a Maruti Ciaz, around 5pm. The lady on board objected, but we explained to her why the car had been stopped,” recalled a traffic policeman who was among those in a 12-member team that was conducting the drive at Kutchery Chowk. “She continued to argue with us for 10 minutes, but we stayed firm,” he added.

By then, DSP Lakra arrived. The traffic policeman said that she then dialled a number and asked them to talk to “Ajoy”.

“We had no idea who Ajoy was since she did not reveal her identity. But we politely told her that a fine was part of the process and that we would have to counsel the driver too. Ultimately, we imposed a fine of Rs 600,” the traffic policeman said.

The next day, urban development secretary Ajoy Singh summoned Lakra to his office and said that his wife had complained that police had misbehaved with her.

Lakra, sources said, explained all that happened and even tendered an apology on behalf of the traffic police team.

But the matter did not end there, alleged a senior police officer.

“Even after listening to Lakra, Ajoy Singh asked the traffic DSP to go to his residence and seek an apology from his wife, Anita. Lakra, who is an upright officer and has never shied away from his duties, refused. How can a senior cop be put through this?” said the senior police officer.

On Thursday, as many as 14 DSPs, including Lakra, were transferred.

Lakra, however, did not indicate he was upset. “Transfer and postings are a part of the job. I am still learning. If I am at fault, I am ready to correct myself. My parents and teachers taught me to respect everybody,” he said.

But several traffic policemen The Telegraph spoke to indicated that Lakra’s fate was worrying and demoralising.

“When they can treat our boss like this, it shows what they think of us and the work we do. It is better to remain a non-performer rather than get punished for being upright,” said a constable.