Dhanbad traders want trains to Calcutta ahead of wedding season 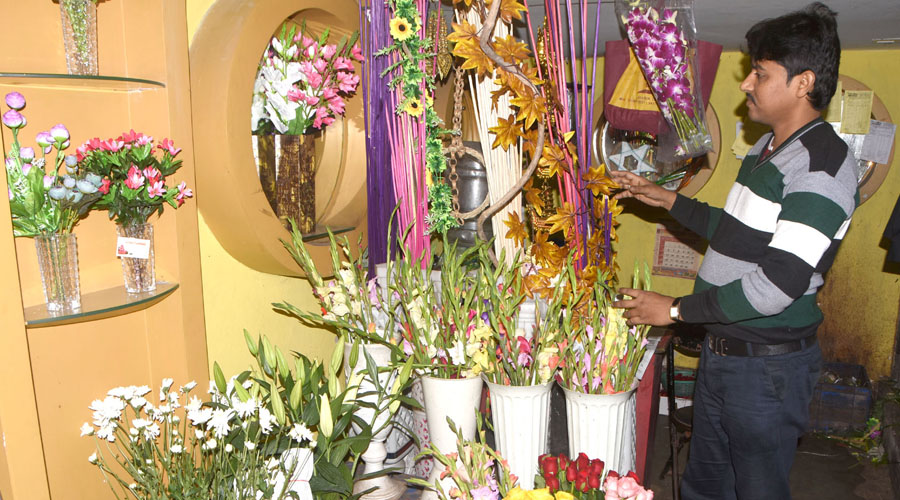 A flower merchant arranging the flowers for decoration in marriage at his shop in court road in Dhanbad on Tuesday.
Picture by Gautam Dey.
Our Correspondent   |   Dhanbad   |   Published 24.11.20, 04:57 PM

The coal town traders are affected by the non-resumption of popular train services between Dhanbad and Calcutta like the Coalfield Express (12339/12340) and Black Diamond Express (22387/22388) through which a large number of daily passengers and small-time traders brought products from Calcutta.

The biggest victim of the lack of non-availability of trains is florists who used to bring a huge stock of flowers from Calcutta. Other traders like readymade garment sellers, footwear traders are also facing the same situation.

The heavy cost of road transportation of flowers is adversely affecting the flower prices, at a time when they are much in demand as more than 5,000 marriages are scheduled in Dhanbad during the lagan season between November 25 and December 15.

Talking to the Telegraph Online on Tuesday, Raju Malakar, a florist of Court More in Dhanbad said, “Though we are bringing some stock from Shaktipunj Express (11448) but being a long-distance train running between Howrah to Jabalpur with only 10 minutes stoppage time at Dhanbad, there is a limited scope of bringing enough flowers and we have to depend on road transport also.”

“The cost for a bunch of flowers used to be around Rs 450 before the lockdown which escalated to around Rs 750 to Rs 800 during the present time due to the addition of extra cost of transportation in the overall cost which used to be much low or almost negligible during normal times,” said Malakar.

“The total cost of hiring a pick-up van for a trip to Calcutta is around Rs 9000 and since we cannot afford to bear the cost individually a group of florists use it as a pool van facility to bring flowers from Calcutta,” said Malakar.

Echoing sentiments, Karu Malakar, another retail flower seller of Dhanbad said, “Though we are very happy that we are getting a huge demand for flower decoration during the marriage season, at the same time we are facing great difficulty in negotiating prices of flowers with the customers due to increased prices.”

“The customers accuse us of taking advantage of the lockdown situation to carry out an exorbitant increase in the prices but the fact remains that the prices have gone up due to the increased transportation cost because of the unavailability of trains,” claimed Karu Malakar.

Former president of Federation of Dhanbad Zila Chamber of Commerce and Industry, Rajesh Kumar Gupta, said, “The Dhanbad retail market is largely dependent on the wholesale purchase by daily passengers from Calcutta and due to lack of availability of popular trains, the market is not picking up to its full strength despite enough scope for increased activity in the marriage season.”

“Though big traders are availing the road transport facility for bringing goods from Calcutta by taking orders on phone but the small traders like the readymade garment sellers, footwear traders on the roadside who could not afford to bear the huge transportation cost are suffering,” described Gupta and demanded the state government allow railways to run more trains for important places like Patna, Ranchi, and Calcutta on a regular basis to allow trade to flourish.