The incident took place early on Wednesday, normal timings expected to be restored later in the evening 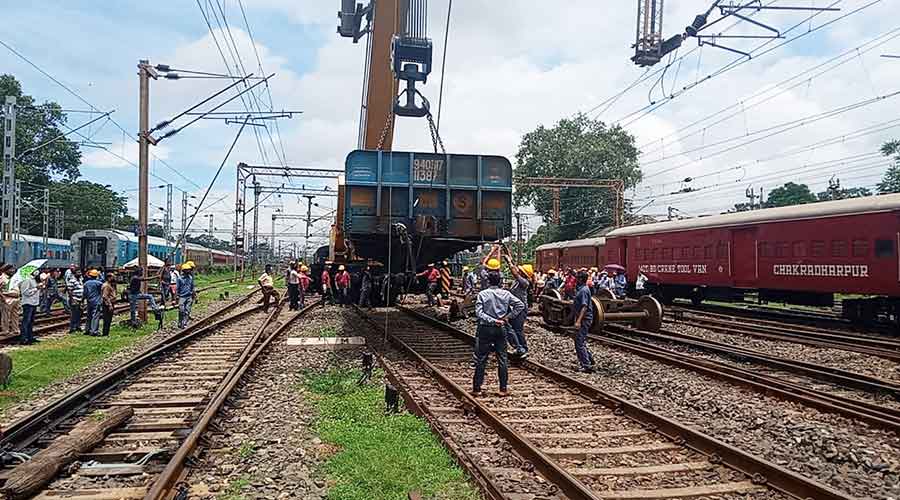 Train services were affected in Tatanagar - Chakradharpur and Tatanagar - Kharagpur section of South Eastern Railway due to derailment of an empty rake of a goods train at Tatanagar railway yard in the early hours of Wednesday.

According to railway authorities the derailment took place at around 3.45 am and soon train movement in that section came to a grinding halt.

The derailment caused cancellation, diversion and rescheduling of several trains.

The 08477 Puri-Yog Nagri Rishikesh Special was made to run on a diverted route via Kharagpur-Midnapur-Adra-Chandil-Sini and Chakradharpur.

The 02096 Howrah-Mumbai CSMT Special was diverted via Kharagpur-Midnapur-Adra-Chandil-Sini and Chakradharpur while the  03288 Rajendra Nagar-Durg Special ran on a diverted route via Chakradharpur and Jharsuguda.

The 02820 Anand Vihar-Bhubaneswar Special was diverted  via Tatanagar-Chandil-Adra- Midnapur and Hijli.

The 02259 Mumbai CSMT-Howrah Special was diverted via Sini-Kandra-Chandil-Adra-Midnapur and Kharagpur.

The 08183 Tatanagar-Danapur Special train was rescheduled by four hours. The train left  Tatanagar railway station at 12.15 pm instead of 8.15 am today.

Snacks and water bottles were provided to passengers because the trains in the Kharagpur-Tatanagar section were  running behind schedule due to diversion.

For the convenience of the passengers of diverted trains, two 60 seater buses and three SUVs were  arranged for travel to Tatanagar from Kandra station by road.

Help desks were also set up at Tatanagar, Chakradharpur and Rourkela railway stations for helping passengers and providing them information about train services.

Railway officials said normal train services were expected to be restored late in the evening.

Chakradharpur railway division also initiated a probe so as to ascertain what led to the derailment.