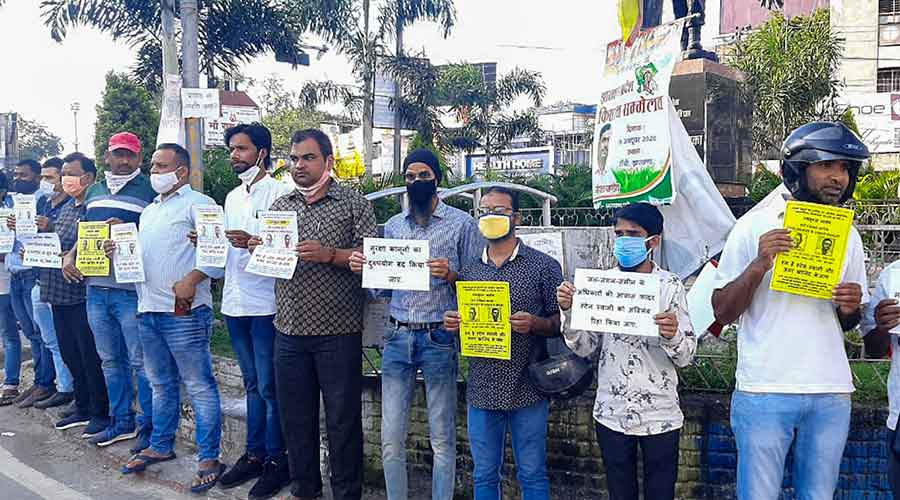 Several leading figures on Wednesday demanded that Father Stan Swamy, arrested in connection with the Elgar-Parishad case, be immediately released. The demonstrators, belonging to various Muslim and social organisations, held up placards to highlight their demands at Paramveer Albert Ekka Chowk in Ranchi and said they stood in solidarity with activists arrested across the country, including Jharkhand.

The demonstrators also protested the continued persecution of rights activists, including Umar Khalid, by implicating them in false cases. The demonstrators maintained that they support the ongoing protests in Ranchi against the oppression. They also demanded that the attacks on people's democratic rights be stemmed and abuse of laws be stopped. The protesters said they support the government of chief minister Hemant Soren in its fight against the detention of Swamy.

A joint team of district administration and police led by ADM (law and order) Chandan Kumar on Wednesday conducted a raid at Tetlmari area and seized around 10 tonnes of smuggled coal.

The team also seized a truck in which smuggled coal was loaded for transport.

A tree on GT road in Hazaribagh.
Picture by Vishvendu Jaipuriar

A tree situated on GT road is creating havoc for commuters travelling during the night. The four lane road is being widened to six lanes.

Congress vice president of Barhi, Yamuna Yadav Wednesday asked the construction company to remove the tree. He said if demand was not met soon, he will not hesitate to launch an agitation in this regard.

A total of 30 patients were discharged from different Covid Treatment facilities of Dhanbad on Wednesday.

Dhanbad Deputy Commissioner,  Uma Shankar Singh said, "All the discharged persons have been provided medical kits and asked to remain in home quarantine for next for next 14 days.”