Daily wager, out to attend nature’s call, drowns in mine pit 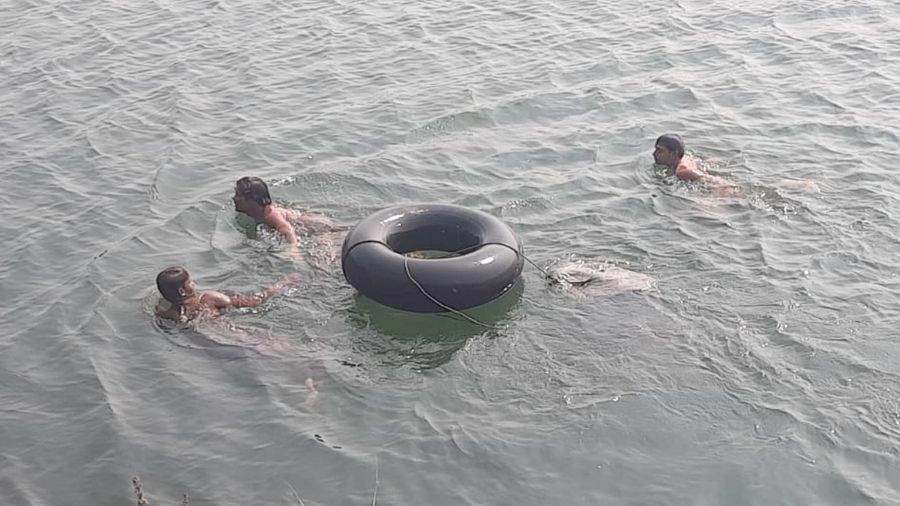 Divers on Thursday fish out the body of Budhan Bhuian, who drowned at a mine pit of the Maheshpur colliery of BCCL in Baghmara a day ago.
Picture by Gautam Dey
Praduman Choubey   |   Dhanbad   |   Published 21.01.21, 09:50 PM

A daily wage earner from Sinidih in Katras died when he drowned into an abandoned coal mine pit. His body was recovered on Thursday at around 1 pm, 24 hours after the accident on Wednesday.

A group of trained divers of Moonidih Area engaged by BCCL and local administration recovered the body of Budhan Bhuian (25), who had gone near the pit on Wednesday to attend his nature’s call.

Bhuian, son of a retired BCCL employee, slipped inside the pit during that time.

A group of local women bathing near the area saw the incident and shouted for help, after which a group of villagers tried to rescue him. But they failed as by that time, Bhuian was deep inside the pit.

A team of Madhuban Police led by officer-in-charge Sonu Kumar who reached the site also called some local divers but they failed to rescue him. After a brief pause, the operation was resumed on Thursday morning with the help of the experts when the body was recovered and sent for post-mortem at Sahid Nirmal Mahto Memorial Medical College and Hospital.

Bhuian’s mother Kalki Devi said that his son was a patient of epilepsy. “He must have slipped into the mine pit during one such attack,” she added.

Baghmara MLA Dhullu Mahto consoled the family members on Thursday and asked BCCL officers to ensure proper safety measures near the mine pit.

Project officer of Maheshpur Colliery of BCCL, under whose jurisdiction the mine pit falls, assured financial help to the family members.

“The barricading of the entire mine pit has been carried out by BCCL with the barbed wires. We have also put the boards indicating the dangerous site and water level in the mine pit. But some local residents still use the mine pit for bathing, dishwashing, cloth washing and other purposes”

Sonu Kumar said “The body will be handed over to family members of the deceased after the arrival of the postmortem report.”