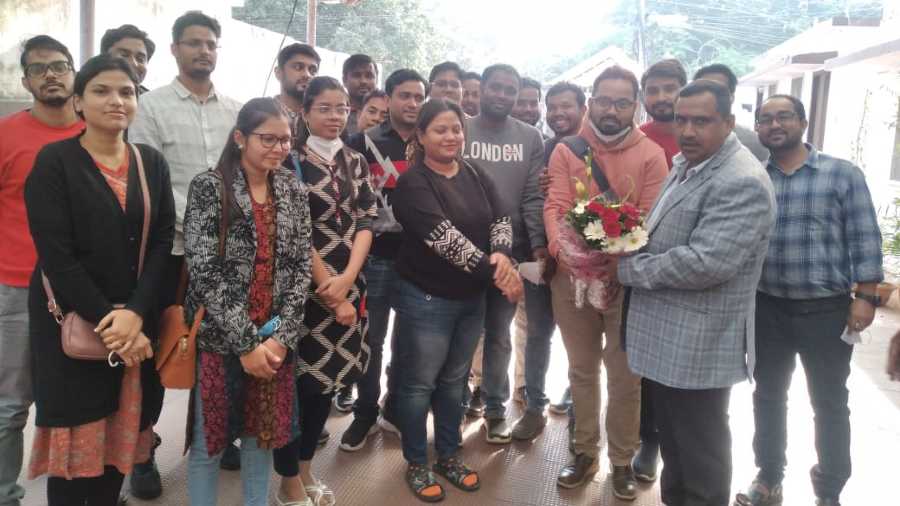 Medical students thank state health minister Banna Gupta on Wednesday in Ranchi after he announced that the Centre had lifted the ban on admissions at Palamau and Hazaribagh medical colleges.
Telegraph picture
Our Correspondent   |   Ranchi   |   Published 15.12.21, 08:23 PM

The Centre's medical education watchdog has lifted the ban on admissions at Palamau and Hazaribagh medical colleges, freeing up 200 seats for the coming academic session, state health minister Banna Gupta announced on Thursday, adding that the state government would begin taking in students soon.

“We are happy that after regular follow ups and requests of the state government, the Centre has finally agreed to lift the ban. Soon, both the medical colleges will start admitting students in 100 seats each the for 2021-22 session," the minister said.

The National Medical Commission had stopped admissions in the Palamau, Dumka and Hazaribagh medical cradles in October-November last year on  grounds of poor infrastructure and faculty crunch. All these colleges were set up during the previous BJP regime led by Raghubar Das and were inaugurated by Prime Minister in the run-up to the  2019 Lok Sabha elections.

In October this year,  NCM had allowed Dumka Medical College to begin admissions after it submitted an affidavit promising to address all lacunae in a time bound manner. With this, Jharkhand is back to offering 300 MBBS seats for the  2021-22 session.

“In all the three colleges where the ban has been lifted, the health department is actively working to sort out issues of manpower, faculty, libraries and laboratories. The lifting of the ban will be helpful for medical aspirants in our state,” he said, adding that besides upgrading facilities, the government was also focussing on hiring faculty on contract on a war footing.

In the evening, several medical students of the state met with Gupta at his residence to thank him.