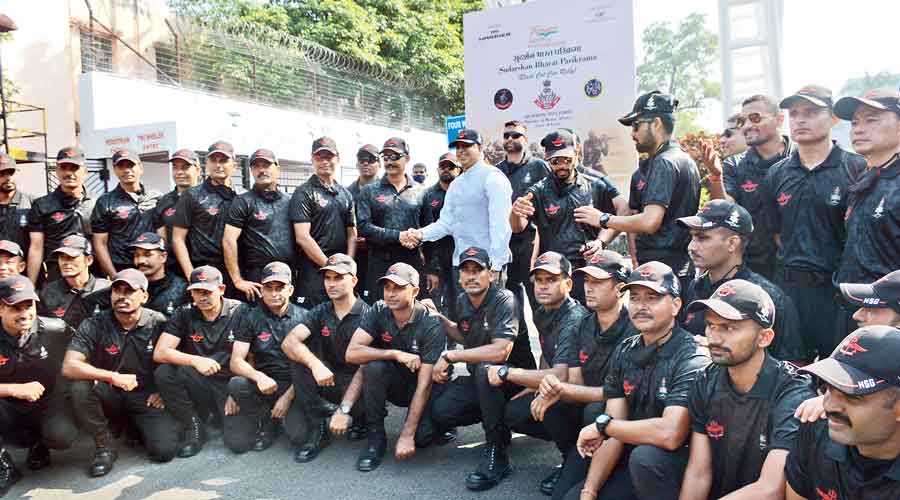 Forty-seven black cat commandos of the elite counter-terrorism unit, the National Security Guard (NSG), touched down in this Jharkhand city on Friday evening as part of a nationwide rally to commemorate 75 years of Independence.

The Sudarshan Bharat Parikrama, organised by the Union home ministry, aims to connect with the youth and instil in them a sense of patriotism and strengthen the spirit of national integration.

The commandos, who are travelling in 15 Tata Harriers, learnt about the legacy of Tata Steel and the steel city of Jamshedpur.

Chaudhary said: “Tata Steel is glad to host the all-India car rally, Sudarshan Bharat Parikrama, of the National Security Guard as part of ‘Azadi ka Amrit Mahotsav’. We are honoured to have the team of 47 NSG commandos, including 12 officers, who will be driving 15 SUVs as part of this journey. They will be continuing their journey further from the historic clean and green city of Jamshedpur that has recently completed 100 glorious years.”

Rally leader Colonel O.S. Rathore said Jamshedpur acted as a great host and that the historic city created by Tata Steel is an important milestone for them.

Jamshedpur was selected as part of the rally because its host Tata Steel, which completed 100 years in 2019, and its founder Jamsetji Nusserwanji Tata is considered the doyen of the Indian industry.

“Jamshedpur also has a deep link with Independence. Mahatma Gandhi visited Jamshedpur for the first time on August 8, 1925, at the behest of Dinabandhu C.F. Andrews, a then labour leader. Mahatma, who was accompanied by Pandit Jawaharlal Nehru, had the twin objective of visiting India’s first planned industrial township and resolving labour unrest there,” said a communiqué issued by Tata Steel.

The communiqué further said that Gandhi during his stay in Jamshedpur had visited several places within the city and was also shown around the steel plant where he had commented: “Tatas represent the spirit of adventure.”

“Tata Steel has been a resolute partner in the journey of self-reliance, by way of its innumerable corporate and philanthropic contributions to the country and its people. Be it in the field of industry, infrastructure, education or healthcare, the company has been the proud flag-bearer of Atmanirbhar Bharat, for more than a century now,” said a Tata Steel spokesperson.