Protesters demanded the arrest of those involved in the pathalgadi massacre 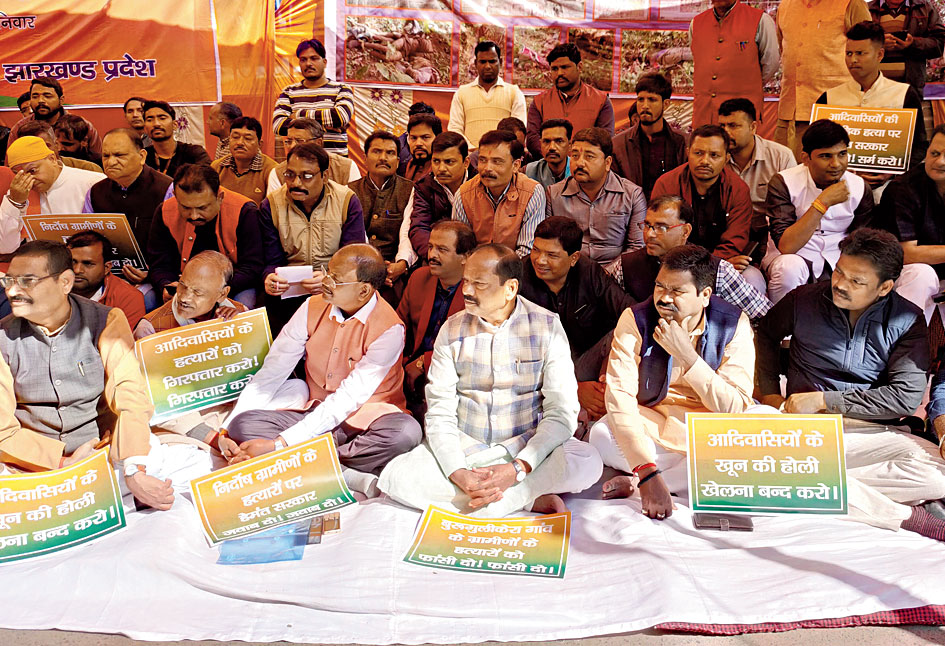 Around 250 BJP workers and leaders staged a silent sit-in in front of the Raj Bhavan here on Saturday to protest against the killing of seven villagers, allegedly by pathalgadi supporters, in West Singhbhum last Sunday night.

The protest began around 11am and continued till noon.

The protesters displayed placards demanding the arresting of those involved in the massacre, with slogans such as “Khoon Ki Holi Khelna Band Karo (Stop playing Holi with blood)” and “adivasiyon ke hatyaron ko phaansi do (hang the killers of tribals).”

Later, a 21-member delegation led by Rajya Sabha members Sameer Oraon and Mahesh Poddar and including Lok Sabha member Sudarshan Bhagat and former chief minister Raghubar Das, handed over a memorandum to the governor demanding her intervention to ensure proper probe into and punishment for the massacre.

Das called the mass murder tribals a failure of the Hemant Soren government.

“The incident is a failure of government. It seems that destructive and anti-social elements of the state do not have any fear of the administration,” the former chief minister said.

“The government, which claims to be supporter of tribals, is actually anti-tribal. The Chaibasa incident has exposed the truth,” Jaiswal said.

Ranchi mayor Asha Lakra claimed the cops were dragging their feet. “Four days have passed when the matter hogged limelight but the accused are away from the clutches of police. This has exposed the deteriorating law and order situation of the state.”

A total of 15 men have been arrested over the incident as of Saturday.

“Hemant Soren’s presence as chief minister has boosted the morale of anti-social elements across the state,” claimed Kamal Kishore Jha, a BJP worker who was part of the sit-in.