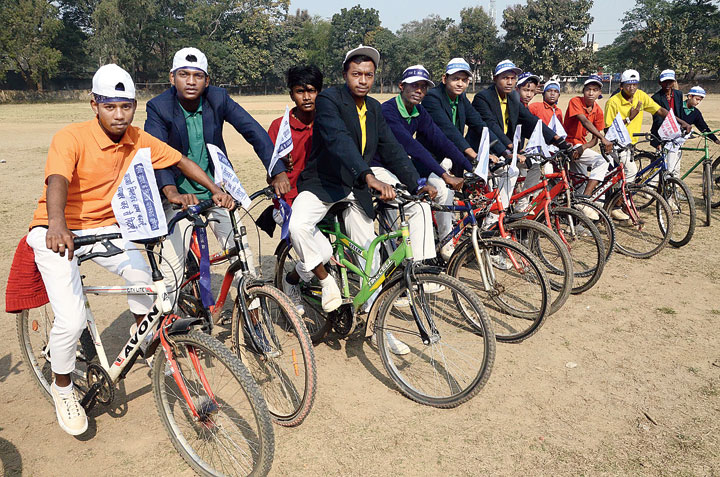 Over 180 youths and children on Saturday took part in a bicycle rally organised in the capital to create awareness against human trafficking, a burning issue in Jharkhand.

A festive atmosphere got created along the route through which the rally, the first of its kind, passed through the capital roads.

Those in the procession shouted slogans such as “Bachchon ko do suraksha aur pyar, mat hone do shoshan ka shikar (give kids security and love, don’t let them be exploited)”.

At some places on the route of the rally, people stood to welcome the participants with water bottles.

Consultant of a Delhi-based voluntary organization, VIVA, Diwesh Lal, who was present in the march, spoke about the problem of human trafficking and asked youths to play a proactive role to prevent it.

“Human trafficking is a heinous crime and each one of us should play a role to prevent it,” Lal said when the march culminated to its original place.

“We often come across reports of how children, young girls and women from Jharkhand are sold in metro cities by brokers. As members of society we should be alert to stop the practice from the start and ensure that Jharkhand has such a good atmosphere that no one dares traffic people,” Khalkho said.

Executive secretary of the JCARN Premchand Hembrom said more such programmes related to human trafficking would be organised in the city.

“Human trafficking is a challenge for society. Our outfit will keep on organising such programmes to create awareness against it,” he said.

The latest National Crime Records Bureau (NCRB) report, released in 2016, says that a total of 90 children were trafficked from Jharkhand in 2015. The NCRB’s figure, however, may just be the tip of an iceberg, feel activists, as many cases of child trafficking don’t get reported.