Advertisement
Home / India / Why is the Modi government so scared of Rahul Gandhi, asks Congress

Why is the Modi government so scared of Rahul Gandhi, asks Congress

This is 'undeclared emergency', says party in response to arrest of thousands of its workers 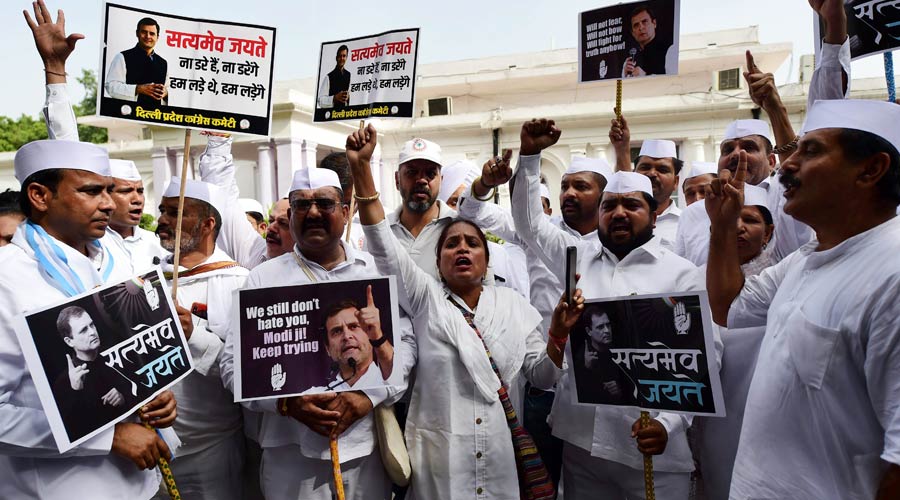 Congress activists being detained during a protest against summoning of party leader Rahul Gandhi in the National Herald case, in New Delhi on Monday
PTI Photo
Our Bureau, PTI   |   New Delhi   |   Published 13.06.22, 11:14 AM

Ahead of Rahul Gandhi's appearance before the Enforcement Directorate, the Congress on Monday said the Modi government has imposed an "undeclared emergency" in Delhi and alleged that thousands of its workers and leaders have been arrested or placed under house arrest.

Addressing a press conference at the party headquarters, Congress chief spokesperson Randeep Surjewala asked why the Modi government was scared of Rahul Gandhi or the Congress as they only planned to march towards the ED's office when their leader appears before the agency for questioning.

He said the Congress is fighting for the truth, which cannot be suppressed and they will continue with this fight against "injustice".

"The Modi government has imposed an undeclared emergency in Delhi and thousands of barricades have come up and thousands of our Congress workers have been arrested since last night," he told reporters.

"We will answer every question that the 'Election Department', the 'puppet ED' will ask. For, the truth will win in the court of untruth and tyranny," he said.

Surjewala alleged that the "descendants of Godse" are once again challenging Gandhi and his descendants. "Neither Godse could kill Gandhi nor will his descendants be able to kill his ideology today," he said.

Asking why thousands of policemen have been deployed in central Delhi ahead of Rahul Gandhi's visit to the ED office, he said, "Is there any threat to the Modi government? Why are you so scared?"

Surjewala alleged that a "scared and cowardly" Modi government is trying to suppress the voice of the truth.

"We will continue our 'Satyagrah' fearlessly against the undeterred draconian subjugation of civil rights and democracy by the Modi government. We will fight undeterred, we will fight fearlessly and we will fight for the people of the country, the downtrodden and the middle class against all-round inflation and joblessness," he said.

The Congress leader accused the BJP of hiding behind the police. "Why does the BJP fear Rahul Gandhi so much. Why is the BJP so scared, we are only walking to the ED office," he asked.

Rahul Gandhi has been summoned by the ED in a money laundering case pertaining to the National Herald-AJL case. The ED has also summoned Sonia Gandhi in the case on June 23