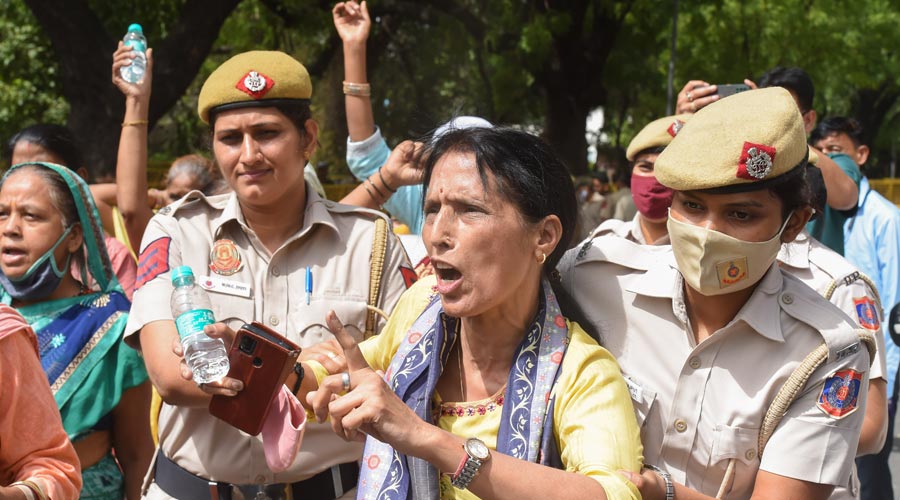 Hours before Rahul Gandhi was scheduled to appear before the Enforcement Directorate in connection with a money laundering case on Monday, Congress workers who gathered for a march against the ED, were detained from areas around  the AICC office on Akbar Road here and taken to Mandir Marg police station, officials said.

A day before the scheduled march, the Delhi Police had denied permission for it.

The police have also put up a poster of the order at the barricades outside the AICC office.

"Security has been stepped up as per the proposed march by the Congress leaders despite denying them permission. All the routes leading to their proposed destination have been heavily barricaded with adequate deployment of forces as a precautionary measure," the officer said, according to PTI.

Ahead of the proposed march by the Congress leaders, the Delhi Police said that it has imposed section 144 CrPC preventing the assembly of more than four people in the area asking them not to violate the law.

"Section 144 CrPC is imposed here. It is requested to all of you that you do not violate the Act 144 CrPC otherwise strict legal action will be taken," said an order from deputy Commissioner of police, New Delhi district.

The Congress leadership is trying to use the Enforcement Directorate summonses to Sonia Gandhi and Rahul Gandhi to buttress the perception of political vendetta by the Narendra Modi government, alleging a conspiracy has been hatched to silence the BJP’s most vocal critics.

Demonstrating that it is not ashamed of an investigation that it believes was prompted by political pressure in a fake case, the Congress organised news conferences in Lucknow, Bhopal, Raipur, Shimla, Ahmedabad, Chandigarh and Dehradun on Sunday to publicise the facts of the case.

The party iterated that it was helping out a financially stressed National Herald, which was not a crime, and asserted that the money-laundering case was farcical as not even a paisa had moved anywhere.

While some linked the ED move to the Bharat Jodo Yatra that Rahul is to lead from October 2, others argued that Modi was desperate to divert people’s attention from the real issues.

Due to the proposed protest, special traffic arrangements have been made in the area, police said. Taking to Twitter, the Delhi Traffic Police issued an advisory about the traffic arrangements in a series of tweets so that no inconvenience is caused to the commuters taking the route.

The traffic police have urged commuters to avoid certain routes till 12 pm due to the protest to avoid any inconvenience to themselves."Kindly avoid Motilal Nehru Marg, Akbar Road, Janpath & Man Singh Road between 0700 hrs & 1200 hrs. Due to special arrangements traffic movement will not be possible on these roads," the tweet said.