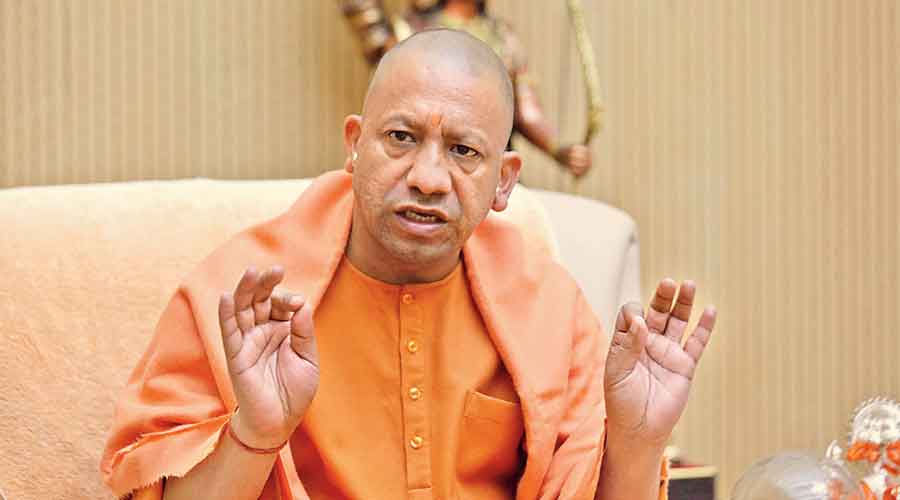 The BJP is embracing with increasing vigour Yogi Adityanath’s “successful” model of aggressive “bulldozer politics” and the demolition drive in the capital on Wednesday by a civic body run by the party is a reflection of such a sharpened communal campaign, politicians from the ruling establishment have said.

The bulldozer has been widely used as a metaphor for the bellicose brand of Hindutva politics of the saffron-clad Uttar Pradesh chief minister. Adityanath earned the sobriquet of “Bulldozer Baba” after the rampant use of the demolition machine by his government to raze alleged illegal properties of those dubbed criminals and dons.

Adityanath’s spectacular victory in the Uttar Pradesh polls last month is being attributed also to his apparently extra-judicial “bulldozer politics” and is now being emulated by other units of the BJP, allegedly to the detriment of minorities, to aggrandise Hindutva politics tailored to reap electoral dividends.

In the process, the so-called Adityanath brand of politics is gaining currency at the national level, BJP leaders said.

“The Yogi brand of politics is a big hit among our cadres and supporters and this seems to be driving many of our leaders to try it out to sway the masses,” a BJP leader said. This leader hinted that after bulldozers were also used in Madhya Pradesh to flatten properties, the plan now was to deploy the tactics with a “long term and larger motive”.

“The impact of (the drive in) Delhi will travel across states,” the leader said, alluding to upcoming elections in BJP-ruled Gujarat, Himachal Pradesh and many other states, besides the 2024 Lok Sabha polls.

The BJP, out of power in Delhi for more than two decades, appears to have warmed up to the bulldozer to make its polarisation card more potent, not only in the capital but across states.

After remaining under the Congress for three terms led by the veteran Sheila Dikshit, Delhi was bagged by the rookie Aam Aadmi Party helmed by Arvind Kejriwal in 2015. Despite all-out efforts by the BJP leadership to communalise the protests against the Citizenship Amendment Act, the AAP returned to power for a second term in February 2020. The BJP could win just eight of the 70 seats while the AAP pocketed 62.

The BJP, however, controls the three municipal corporations in Delhi. Elections to these corporations were scheduled this year but had to be put off as the central government tabled a bill in Parliament to merge the three civic bodies. The AAP vociferously protested, alleging that the BJP was taking the legislation route to postpone the polls fearing defeat.

The anti-encroachment drive in Jahangirpuri was carried out by the North Delhi Municipal Corporation on Wednesday after communal clashes during a Hanuman Jayanti procession last Saturday.  Delhi BJP president Adesh Gupta had written to the mayor demanding the identification and demolition of “illegal encroachment” by those arrested for the Jahangirpuri violence.

“The Delhi BJP chief wrote to the mayor after the bulldozer drive was cleared by the top leadership of the party,” a Delhi BJP leader said.

“Rohingyas and Bangladeshis were settled by the Congress. Now the AAP is giving them free ration, free electricity, free water and money,” Gupta tweeted on Thursday.

Delhi BJP leaders said attempts were being made to place the AAP alongside the wider Opposition in the “anti-national” bracket.

The AAP has been countering this by taking a more hardline Hindutva stand than the BJP. The AAP has not joined the wider Opposition in condemning the bulldozer drive in Jahangirpuri and has sought to turn the tables on the BJP by accusing it of settling “Rohingya and Bangladeshis” in other parts of the country and using them to engineer riots to derive political gains.

Kejriwal has been pussyfooting around the latest controversy, staying away from Jahangirpuri. On Thursday the Delhi chief minister was in Karnataka, addressing a party rally as part of efforts to increase the AAP’s base. Karnataka is scheduled for polls next year.

The BJP is also hoping that the political message emanating from the bulldozer drive in Delhi would travel to election-bound Gujarat and Himachal Pradesh, party leaders said. In both states, ruled by the BJP, the AAP has been making concerted attempts to make inroads after its victory in Punjab.