Chandrashekhar Azad, the Bhim Army president, demanded better treatment and security for the surviving girl, who is the only eyewitness 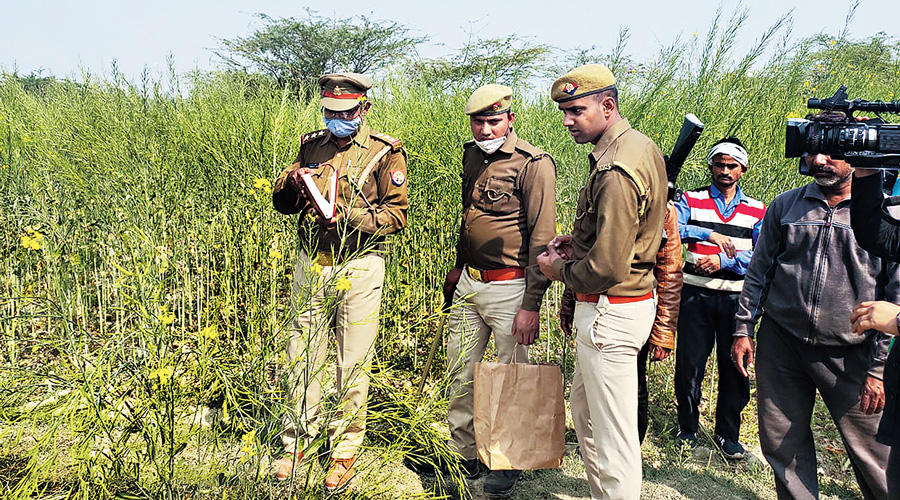 Congress leader Priyanka Gandhi Vadra has described the deaths of two Dalit girls in Uttar Pradesh’s Unnao as “heart-rending” and alleged that the Yogi Adityanath government had “detained” members of the victims’ families to “create hurdles in the legal process”.

Priyanka accused the state government of not only suppressing the Dalit society but also crushing the honour and human rights of women.

“The Unnao incident is heart-rending. It is necessary for the sake of the investigation and the process of justice to listen to the family members of the girls. The third child should get immediate good treatment,” the Congress general secretary wrote in Hindi on Facebook on Thursday.

Two minor girls, their hands and feet allegedly tied, were found dead about 150 metres from their home in a bush near a mustard field in a village in Unnao around 9.30pm on Wednesday. The third girl, also a minor and belonging to the same family, was found unconscious. Her condition was stated to be critical on Thursday.

“As per news, the victims’ family members have been detained. It is an effort to create hurdles in the legal process. What will the government achieve by detaining them?” Priyanka asked.

According to some reports and accounts of neighbours of the victims, the police had taken the male members of the girls’ family for questioning on Wednesday night and they returned on Thursday afternoon. The police denied having detained any family member.

“I request the UP government to listen to the families and shift the third girl to Delhi for treatment,” Priyanka said.

“The UP government is not only crushing Dalit society, but also the honour and human rights of women. But they should remember that I and the entire Congress party will stand as the voice of victims and will endeavour to get them justice,” she tweeted.

Chandrashekhar Azad, the Bhim Army president, demanded better treatment and security for the surviving girl, who is the only eyewitness. “The child should immediately be brought to the All India Institute of Medical Sciences, Delhi, by an air ambulance…. We will not allow a repetition of Hathras in Unnao.”

The post-mortem report found no injury marks on the two teenage girls and the cause of their death could not be immediately ascertained, Uttar Pradesh police chief Hitesh Chandra Awasthi said on Thursday.

The third girl, admitted in a critical condition to a Kanpur hospital, was being treated for suspected poisoning, sources in the healthcare facility said.

A police officer rejected suggestions that the hands of the victims were tied, citing the absence of any injury marks. Viscera samples of the two victims have been preserved for further examination, Awasthi said.

Paramjeet Arora, the public relations officer of a private hospital in Kanpur where the 17-year-old third girl is on ventilator support, said: “The condition of the girl is critical. It is a case of suspected poisoning.”

Villagers who had accompanied the girls’ parents during the search said the hands and legs of the victims were tied with their dupattas and they were unconscious when found.

While two of them, aged 13 and 16, were declared dead on arrival at Unnao district hospital, the 17-year-old third girl was first admitted to Lala Lajpat Rai Hospital, Kanpur, by the police and later shifted to the private hospital.

The police have registered a case against unknown persons based on the complaint lodged by the girls’ family.

A villager said the police had taken the male members of the victims’ household to the police station at night and allowed them to return on Thursday afternoon. The villagers said the girls belonged to a joint family.

S.A. Kulkarni, the superintendent of police of Unnao, said: “It is a suspected case of poisoning. But we are probing every possible angle on the basis of the information gathered from the villagers.”

Kulkarni denied that the victims’ family members had been detained.

Additional director-general of police S.N. Sabat said: “The doctors have said prima facie it is a case of poisoning. Their clothes were intact and there was no sign of any struggle.”