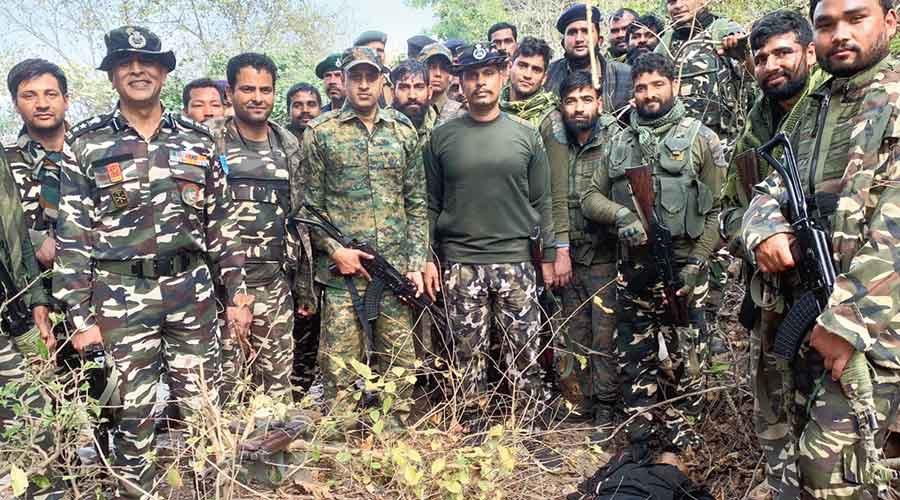 Security personnel who participated in the joint operation against the Maoists in Bihar’s Lakhisarai district on Wednesday.
Sanjay Choudhary
Dev Raj   |   Patna   |   Published 03.02.22, 03:22 AM

At least two Maoists were killed and several others were injured in an encounter with the security forces in Bihar’s Lakhisarai district on Wednesday.

A self-loading rifle, a pistol, 170 cartridges, improvised explosive devices, wireless communication equipment and other material were recovered from them.

escaped with many of their colleagues who suffered bullet injuries in the Ghoghi Korasi hilly and densely forested area under the Piri Bazar police station, around 170km southeast from Patna.

Bal (SSB) and lasted for several hours. A search operation is still going on in the area to trace out the left wing extremists.

“Our operation was based on the intelligence inputs about the movement of the group of Maoists led by Arjun Koda and Baleshwar Koda. We have identified the two neutralised members of their group as Birendra Koda and Jagdish Koda. Both of them were facing at least 10 cases each and were also booked under the Unlawful Activities Prevention Act (UAPA),” Lakhisarai SP Sushil Kumar, who led the operation, told The Telegraph.

Birendra and Jagdish were among the most wanted in Munger, Jamui, Lakhisarai districts in Bihar and neighbouring Jharkhand. Their bodies have been sent for post-mortem.

Kumar added that the group could have been 15-member strong.

“The death of the two of the most wanted among them will be a serious setback for them. Our men are looking for bodies of other persons belonging to the extremist group because several of them had suffered bullet injuries in the encounter,” he said.

Lakhisarai district has long been a hotbed of left wing extremism and has seen several encounters between the security forces and Maoists over the last couple of decades.

Several police persons have also lost their lives in such incidents.