Advertisement
Home / India / The old man and his mango tree

The old man and his mango tree 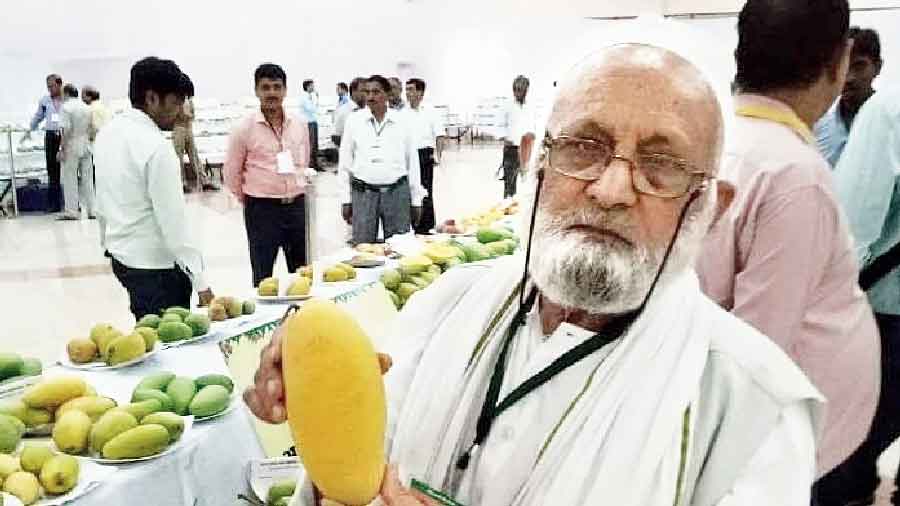 Theirs is a friendship of over half a century, the old man and his mango tree.

His days, spent with a monk-like contentment knowing that each could be his last, are now largely reduced to the tree’s shade and the tree’s care.

The tree, at least 120 years old, was there long before Kaleem Ullah Khan, 82, first came to this field in Malihabad in Uttar Pradesh. And it will be there long after he is gone.

But Khan has spent a lifetime grafting hundreds of different kinds of mango onto this mother tree — and by doing so, he has grafted his own life story onto it as well.

His profound affection is obvious as he runs his hand over the bend of a cut in the tree’s bark as if caressing an old scar. He walks the nursery surrounding the tree with the care he would use in tiptoeing over sacred ground, as he checks on the new saplings, readied to be sold far and wide. He has moved his bedroom to the edge of the nursery; he has stored the planks for his own future coffin nearby.

“If you look at it from a distance, it’s a tree. But when in fruit, you are in awe — what is this show?” he said, pointing to the tree’s dense branches that curled out like the tentacles of an octopus. “If you see through your mind’s eye, you will see that this is at once a tree, an orchard, and most importantly it is a college for the world’s mangoes.”

Mango has not only been Khan’s livelihood, but also his identity. He has gained national, even global, fame as the “mango man” for his decades of experimentations.

The kinds of mango grafted over decades of work on branch after branch of the mother tree, now drooping with the sweet fruit, are so many that he struggles to remember all their names.

There is the NaMo mango, named after Prime Minister Narendra Modi in 2014, when he swept to power with the promise of growth and development for India; a mango named after Sachin Tendulkar, who led India’s national cricket team; another named after the legendary Mughal-era dancer and courtesan Anarkali. The pulp of each side of a Anarkali mango has a different colour, different aroma and different flavour.

One of Khan’s earliest varieties is named after Aishwarya Rai, the actress.

For his efforts, the Indian government awarded him one of the country’s highest civilian honours, the Padma Shri, in 2008.

Khan is philosophical about the fruit, and obsessive — like a scientist who, at the end of a lifetime of discovery, is resigned to the vastness of those still beyond his reach. He repeats to anyone and everyone his faith in the fruit’s infinite potential.

On a recent afternoon, he left the nursery to attend the swearing-in ceremony of chief minister Yogi Adityanath. Khan was hoping to get a minute with Modi, the guest of honour, to make a pitch about what he is dedicating the remaining days of his life to: an effort to prove that extracts from the mango flower and the tree’s sap (which he adamantly refers to as “the tree blood”) can cure anything from impotency to heart disease.

But he never made it to the event, stuck in a traffic jam.

Khan’s view of the mango — that we are all fleeting, but that the fruit is almost eternal — embodies the passion for it found across much of India. The country is the world’s largest producer of mango, much of it consumed domestically, often during heated debates about which region produces the most delicious variety, or how exactly the mango should be eaten.

“We come, we eat mangoes, and we leave the world,” Khan said. “But as long as the world is there, this fruit will be there.”

He was born in 1940 in Malihabad, where his father, Abdullah, ran the tree nursery and raised 11 children.

The son was a distracted and miserable student. Before the news of his failing seventh grade — for the second time — reached his father, Khan packed a basket of mangoes and took a predawn train to his grandmother’s village about 200 miles away.

“I stayed there 17 days so I don’t get a beating,” he said with a smile. “When I came back, I quietly joined my father at the nursery. He didn’t say anything.”

That was the beginning of the son’s life of experimenting with the fruit: crossbreeding, grafting branches, growing new saplings.

One of the earliest trees he experimented on as a teenager dried up soon after, leaving him scarred — and with questions he wanted to answer. But it would be decades before he could return to grappling with those mysteries, as he had to focus on the nursery’s commercial work, to raise and support his own family.

It wasn’t until the 1980s that he turned his attention again to developing new kinds of mangoes, mainly on the 120-year-old tree to which he has grown so close.

The tree’s original type of mango — the “Asl-e-mukarar,” which translates to something like “the original, repeated” — is named after a tradition in local poetry readings where the audience, with shouts of “Mukarar, Mukarar,” requests a favourite line to be read again.

Khan continued to graft onto the old tree, eventually producing 300 different kinds of mangoes — each varying in colour, size, taste, density and aroma. His method is exacting. First he carefully slices a wound into one of the tree’s many curling branches, then he inserts a piece cut from the branch of another type of mango tree and ties them together so they generate new tissue.

As word of his success spread, the presidential palace in New Delhi wanted one of his trees. Khan was elated, he said, “that a tree from a small man, the soil from this small place, Malihabad” would make it to India’s capital. He chose a younger tree on which he had grafted 54 different kinds of mangoes.

“For three days, I was restless — how do I shift it? This is a delicate thing,” Khan remembered thinking. “Just like when a mother is putting a baby to sleep, feeding it milk, and the baby falls asleep and the bottle is removed and the baby doesn’t even notice — we have to remove the tree like this.”

Photos from the presidential palace archives show the planting ceremony in August 1999: A proud Khan, in his usual white kurta suit and white cap, watched as President K.R. Narayanan and other dignitaries shovelled dirt.

“The President joked to his wife that ‘this man is a scientist without education,’” Khan recalls. “I told him I am not a scientist — I am just a servant of this tree.”

If anything, Khan has a bone to pick with scientists.

Not far from his nursery in Malihabad is the Central Institute for Subtropical Horticulture, which began as the mango research institute in the 1970s. Scientists there dismiss Khan’s claim of hundreds of varieties, saying his efforts should be considered as just “new hybrids”, a scientific distinction that incenses Khan. Developing a new variety, the scientists say, requires years of experimentation and testing, as many as two decades of work before certification.

But they, too, were admiring of Khan’s dedication.

“What he is doing is an art,” said Neelima Garg, the director of the centre who has spent 34 years there as a scientist.

As Khan prepares for what he sees as the final leg of his life’s journey, he spends most of his time around the old tree. About two months ago, he moved from the house where his wife, sons and grandchildren live, to another house on the edge of the nursery — taking up a bedroom that has a balcony overlooking the tree.

He has advised his children to complete his funeral and burial processions as quickly as possible after he dies — hence the planks for the coffin in the nursery storage, ready for quick assembling.

Through his mango work, Khan has made many friends and influenced many more, but he insisted he didn’t want crowds of people at his funeral. “I don’t want people to be bothered by having to come visit,” he said.

Khan is content with the fact that he will soon depart. A Muslim by faith, he believes in afterlife — and there, too, he sees the prospect of mangoes.

“My real home is there,” he said. “And it is written — that all the fruits of the world are there.”

“What bothers me is that all this will go to the grave with me,” he added about his way of developing new mangoes. “But what makes me happy is that all those people who took saplings, when their trees bear fruit, they will think of me.”