Tailor's murder: Congress alleges one accused is a BJP member 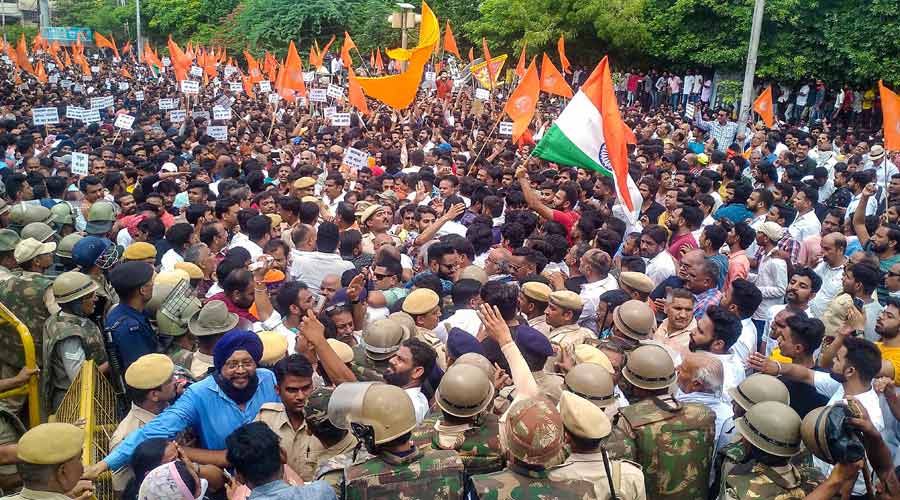 Police personnel in a scuffle with members of Sarva Hindu Samaj during their protest against the killing of tailor Kanhaiya Lal in Udaipur.
PTI Photo
Our Bureau, PTI   |   New Delhi   |   Published 02.07.22, 01:25 PM

The Congress on Saturday alleged that one of the main accused in the brutal killing of a tailor in Udaipur is a "BJP member" and asked whether the Centre had moved quickly to transfer the case to the NIA due to this reason.

Addressing a press conference at the Congress headquarters here, party's media department head Pawan Khera said a very sensational disclosure has been made by a media group in connection with the Udaipur incident which pointed to the BJP links with Riyaz Attari.

Some reports have also referred to the accused as Riaz Akhtari.

"The killer of Kanhaiya Lal, Riyaz Attari is a member of the BJP," Khera said in a tweet after the press conference.

Earlier in the day, responding to a tweet by a Congress leader referring to one of the accused's alleged BJP links, BJP's IT cell chief Amit Malviya dismissed the claim as "fake news".

"I am not surprised that you are peddling #FakeNews. The Udaipur murderers WERN'T members of the BJP. Their attempt to infiltrate was like the LTTE assassin's attempt to enter the Congress to kill Rajiv Gandhi," he tweeted.

"Congress should stop fooling around with terror and national security," Malviya said.

Tailor Kanhaiya Lal was killed Tuesday afternoon by two cleaver-wielding men, who posted a grisly video of the crime online claiming responsibility for the murder.

The two accused, Riaz Akhtari and Ghouse Mohammad, have been sent to judicial custody for 14 days.

"It has also come to the fore in the same disclosure that the main accused Riyaz Attari often participated in the programmes of Rajasthan BJP leader and former minister Gulabchand Kataria," he alleged.

"Not only this, pictures of the main accused Riyaz Attari attending the meetings of the BJP's Rajasthan minority unit are also in front of the world," Khera claimed.

Questioning the "silence" of Prime Minister Narendra Modi and Home Minister Amit Shah, the Congress leader asked whether the Bharatiya Janata Party and its leaders are trying to create an atmosphere of religious frenzy in the country.

"Is the Bharatiya Janata Party, through its spokespersons and leaders, trying to take advantage by polarising the country," he asked.

Khera said Rajasthan Chief Minister Ashok Gehlot had welcomed the transfer of this case to the NIA.

However, in light of "new facts", the question that arises is whether the BJP-led government at the Centre moved quickly to transfer the case to the NIA due to these reasons, he said.