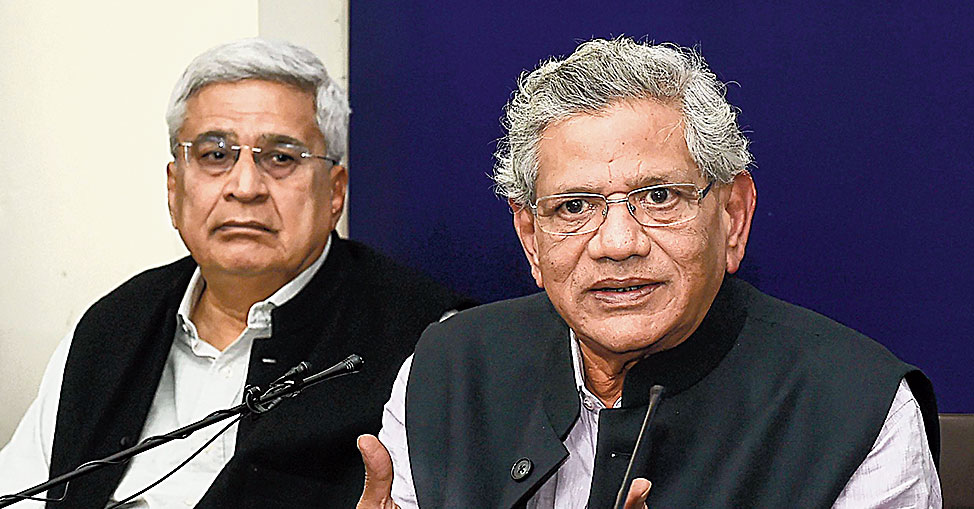 Several former presidents of the Jawaharlal Nehru University Students’ Union, including leaders from across political parties, on Monday spoke out in solidarity with an ongoing agitation against a hostel fee hike, lending their support for a protest call the union has given.

“Our solidarity is not only confined to the question (of fee hike),” CPM general secretary Sitaram Yechury, who was elected thrice as JNUSU president between 1977 and 1978, told a media conference.

“Even the struggle in JNU is not confined to the question of the fee hike, it is part of the larger struggle in order to protect public-funded education in India.”

The JNUSU — which has been spearheading a strike against the doubling of hostel charges, beyond the reach of 40 per cent of boarders — has called upon all student unions to observe Wednesday as a day of protest to protect public funding of education.

A central team that has met teachers and students to find a solution to the fee-hike row is expected to submit its report to the human resource development ministry soon.

CPM politburo member Prakash Karat, who had drafted the JNUSU constitution as its president in 1973-74, said the earliest successful agitation of the union was to bring in an admission policy that gave weightage to students from the marginalised sections of society, and to cap mess bills at Rs 100 per month. “Today’s struggle is precisely to maintain this character,” the former CPM general secretary added.

Journalist Amit Sengupta, who was JNUSU president in 1989-90 and the only Independent to have held the post, said it was decisions like the fee hike that led to what he called “an onslaught” on students. “And if you object, you are immediately labelled anti-national.”

Several other former JNUSU presidents, including the Congress’s Shakeel Ahmad Khan and the NCP’s D.P. Tripathi, have supported the call for Wednesday’s protest.

“This year alone, more than Rs 90,000 crore have been given as tax rebates to corporates. On one hand there is a recession, people have lost purchasing power, and those who have voted are being told that you pay tax, now also pay for your studies. In all universities fees are being hiked… and the number of people who cannot make it to university is increasing,” N. Sai Balaji, who was JNUSU president last year, said.

On Sunday, JNU authorities set up a panel — which doesn’t include students and teachers’ representatives — that asked students to suggest ways to resolve the strike on Sunday itself.

A Right-wing group called Sudarshan Vahini led a march against JNU students near the campus on Sunday.