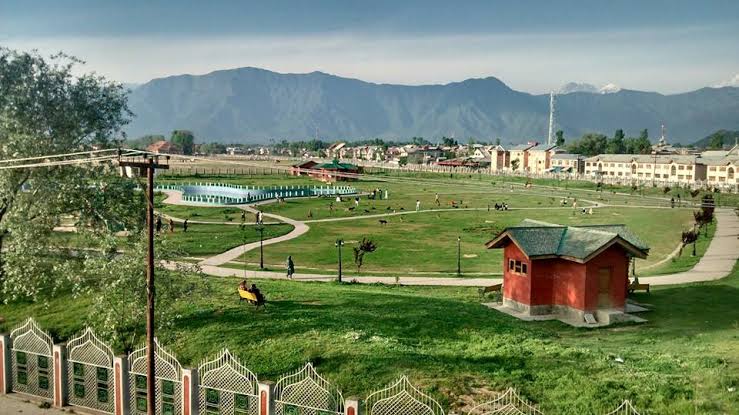 The Jammu and Kashmir Waqf Board, headed by BJP leader Darakshan Andrabi, has caused resentment by proposing a cancer hospital on the sprawling grounds of Srinagar’s Eidgah, one of the Valley’s biggest Muslim religious centres that also functions as a playground.

The announcement has been followed by another, from Jammu and Kashmir BJP general secretary Sunil Sharma, that Union home minister Amit Shah might lay the foundation stone for the hospital during his Valley visit next week.

The statements have sparked fears that the BJP is trying to usurp the Eidgah – a praying ground used by thousands during special religious occasions — and erase its Muslim and azadi connection.

The place has hosted some of the biggest separatist gatherings in the last three decades, and is home to a “martyrs’ graveyard” for militants and civilians killed in security force action.

The Eidgah is the biggest open space in Srinagar’s old city and sprawls 650 kanals or about 80 acres. A corner of it hosts a centuries-old mosque.

Decades ago, one portion of the ground was converted into the “martyrs’ graveyard”. Later, the government built a big park for children on a part of the Eidgah, while thousands of city youths treated another part of it as a playground. None of this faced any resistance from local people.

But the announcement about a cancer hospital has touched a raw nerve, perhaps because it is an initiative by a BJP leader.

Local sportsmen have staged protests against the alleged attempt to “usurp” a sports facility.

The separatist Hurriyat Conference has termed it a “takeover” by the administration of lieutenant governor Manoj Sinha.

The Hurriyat said the land had been bought in the 15th century by the Sufi saint Mir Mohammad Hamdani, whose father Mir Syed Hamdani is considered the founder of Islam in Kashmir.

“He gave it to the public for offering the congregational Id prayers. Many eminent scholars and saints have delivered their sermons there — such as Sheikh ul Aalam and Sheikh Hamza Makhdoom…. It also serves as a playground for the community, especially Shahr-e-Khaas (old city) which has a severe dearth of public parks. In fact, Kashmir’s first cricket and football games were played there,” a Hurriyat statement said.

“(The) Eidgah also houses the martyrs’ graveyard which has over 1,000 people who were slain in the last 33 years (buried there). But now the administration in Kashmir wants to take over the sacred space of Eidgah claiming that it would build a ‘hospital’ despite the availability of space elsewhere. For Kashmiris, this space is holy and part of their historical, cultural and spiritual heritage. The space should be preserved and any move to strike at the heart of Kashmir’s spirit must be abandoned.”

the spot on Wednesday to allay the youths’ fears. He promised to develop the playground

Andrabi told The Telegraph that the Eidgah was waqf property and that she, as its chairperson, was within her rights to build a cancer hospital there.

“The rest will be used for sports. There is also a big chunk where a park has come up but I do not know why some people have problems building a cancer hospital. My only aim is to help the needy.”

She added: “I have requested the Union home minister

to lay the foundation stone

but there has been no response till now.”

Asked whether the government was against her plan, she said she didn’t know.

“The plan to build the hospital was a waqf decision, not the government’s. The waqf (board) has not got the money for construction and I hope the Centre will help,” she said.

“I have not spoken to him (the divisional commissioner) about this. I remain too busy with my work.”

On Friday, former chief minister Mehbooba Mufti waded into the controversy, asking the authorities not to deprive Muslims of their premier religious centre.

“Our Jamia Masjid (often) remains shut (for big gatherings). Now do you want to shut the Eidgah…. Nothing should happen to the Eidgah without consulting religious leaders,” Mehbooba said.