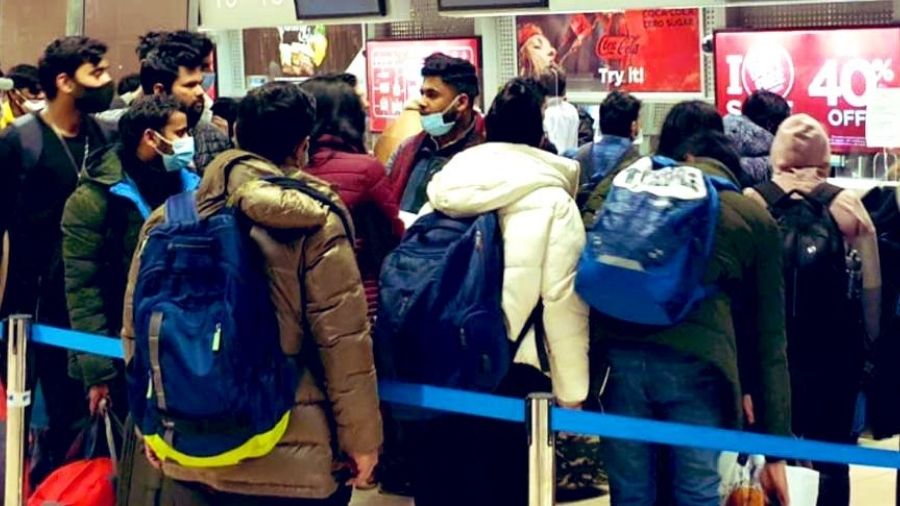 The ninth flight of Operation Ganga carrying 218 Indian nationals who were stranded in Ukraine reached the national capital from Bucharest on Tuesday.

The evacuation flight is part of the Indian government's mission to bring back its nationals from the war-torn Ukraine in the aftermath of Russia's offensive in the east European nation.

As Ukraine has shut its airspace due to the conflict with Russia, India is currently evacuating its nationals by moving them via land routes to the east European country's neighbours, namely Romania, Hungary, Poland and Slovakia, and then flying them out from there.

Railways Minister Ashwini Vaishnaw welcomed the batch of Indian nationals at the Indira Gandhi International Airport on Tuesday morning and assured them that the Indian government was working to ensure that every Indian in Ukraine returns home safe.

The Indian government is taking all efforts to bring all the students safely back home from Ukraine. I appeal to them to tell their friends in Ukraine to have strength and keep patience, he assured.

Earlier, another flight from Bucharest with 182 Indian nationals reached Mumbai.

The minister said that rail facilitation counters were set up at the Indira Gandhi International Airport.

After you deboard, railway facilitation counters have been set up for your journey back home," he added.

According to official estimates, about 18,000 Indian students are studying in universities across Ukraine.