Reduce VAT on fuel, Modi tells states in the spirit of 'cooperative federalism'

I am not criticising anyone, just discussing, says Prime Minister at meeting with chief ministers 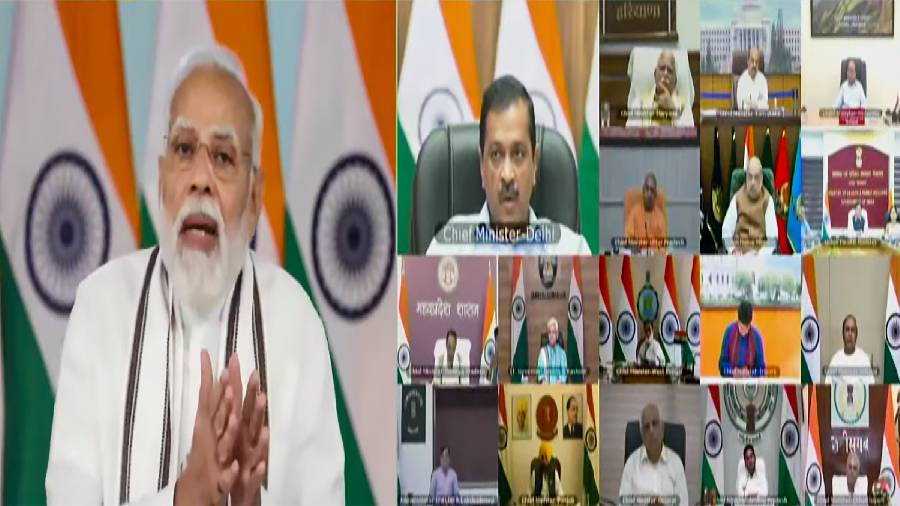 Prime Minister Narendra Modi speaks during his meeting with Chief Ministers regarding the Covid-19 situation across the nation through a video conference, in New Delhi
PTI picture
Our Bureau, PTI   |   New Delhi   |   Published 27.04.22, 02:25 PM

Prime Minister Narendra Modi requested states to reduce the Value Added Tax (VAT) on fuel "in the spirit of cooperative federalism" on Wednesday during an interaction with chief ministers on the Covid scenario.

Listing fuel prices in cities across the country, Modi pointed out that several states that had lowered VAT had lower fuel prices. "I am not criticising anyone, just discussing," he said while listing out the states that did not reduce VAT on fuel during the steep hikes.

The Prime Minister said those states that cut taxes suffered losses but they still took the “positive step”. Had Karnataka not cut taxes, it would have made an additional Rs 5,000 crore in revenue in the last six months. Gujarat too would have made Rs 3,500 to Rs 4,000 crore more.”

Modi pointed out to chief ministers that 42 per cent of the Centre’s revenue go to the states and that in a time of “global crisis, we should work together as a team”.

Speaking at an interaction with chief ministers on the emerging Covid-19 situation in the country, Modi said he wanted to flag a separate issue of the challenges being faced by the people due to the global situation.

"The situation of war which has arisen, has affected the supply chain, and in such an environment, the challenges are increasing day by day," Modi said in an apparent reference to the Russia-Ukraine conflict.

"This global crisis is bringing many challenges. In such a situation, it has become imperative to further enhance the spirit of cooperative federalism and coordination between the Centre and states," he said.

He said the Centre had urged states to reduce taxes and transfer the benefit to the citizens.

"Some states reduced taxes but some states did not give any benefit of this to the people. Due to this, the prices of petrol and diesel in these states continue to remain high. In a way, this is not only injustice to the people of these states but it also has an impact on neighbouring states," he said.

Many states such as Maharashtra, West Bengal, Telangana, Andhra Pradesh, Kerala, Jharkhand and Tamil Nadu for some reason or the other did not listen to the central government and the citizens of those states continued to be burdened, he said.

"I request that what should have been done in November, you should pass on the benefit to the citizens by reducing VAT," Modi said.

In this context, he also mentioned the "manifold" increase in fertilizer prices due to its rise globally, and India depends on its import. The government does not want to transfer the burden to the farmers, Modi said, asking states to give top priority to people's interest. The opposition has often blamed the central government for high fuel price, while the BJP has cited rising crude cost in the international market for this and also attacked the states run by rival parties for not doing enough.