Bengal chief minister Mamata Banerjee made a forceful pitch for shelving of personal and political differences, saying 'the people should lead' the movement 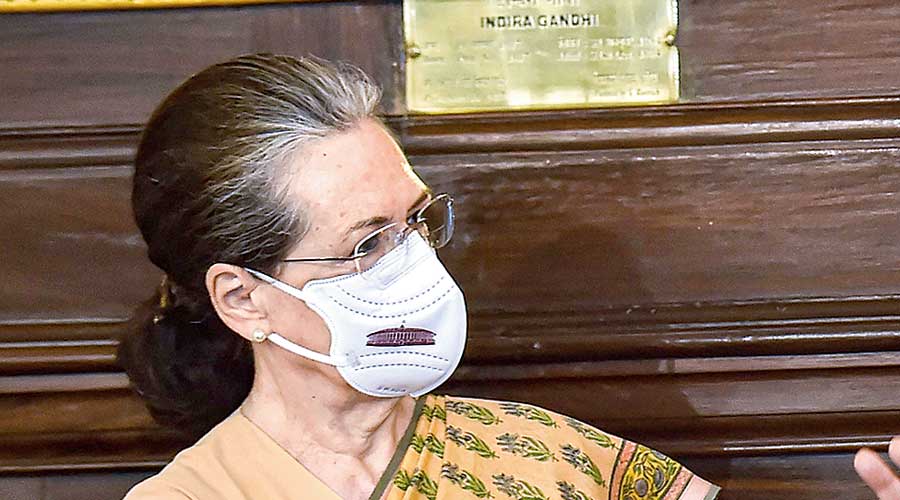 Senior Opposition leaders on Friday agreed to set aside their differences for a united effort to protect constitutional rule in India, stressing that preparations for the 2024 general election had to start now.

Concerns were expressed about communication gaps and inadequate public action, but every leader stressed unity of purpose and appealed to citizens to thwart the designs to subvert constitutional rule.

“We, the leaders of 19 Opposition parties, call upon the people of India to rise to the occasion to defend our secular, democratic, republican order with all our might. Save India today so that we can change it for a better tomorrow,” a joint statement adopted at the virtual meeting called by Congress president Sonia Gandhi said.

“But the larger political battle has to be fought outside. Of course, the ultimate goal is the 2024 Lok Sabha elections, for which we have to begin to plan systematically with the single-minded objective of giving to our country a government that believes in the values of the freedom movement and in the principles and provisions of our Constitution,” she said.

“This is a challenge, but together we can and must rise to it because there is simply no alternative to working cohesively together.”

Sonia added: “We all have our compulsions, but clearly a time has come when the interests of our nation demand that we rise above them.... Let me say for its part, the Indian National Congress will not be found wanting.”

Trinamul leader and Bengal chief minister Mamata Banerjee made a forceful pitch for the shelving of personal and political differences, saying “the people should lead” the movement to save India.

She said that instead of worrying about who should be its leader, the Opposition group should form a core group that would plan and execute its programmes.

Nationalist Congress Party veteran Sharad Pawar appealed to people who believe in democratic principles to come together. He asked the parties to decide priorities and draw up an action plan to mobilise public opinion against the government.

He referred to a communication deficit among Opposition parties and regretted that they had failed to cash in on the myriad issues troubling the nation.

“The Opposition parties must stick to their own agenda and provide the nation with an alternative vision and governance scheme,” he said.

“Regional parties that are strong in certain states should be put in the driver’s seat in their areas. Joint outreach programmes should be launched without delay.”

The parties decided to jointly organise protests across the country from September 20 to 30. The parties’ state units will decide the forms of these protests keeping in mind the local Covid regulations and protocols.

The joint statement presented a comprehensive critique of the government.

“The destruction of the Indian economy, with deepening recession, is pushing crores of our people into joblessness, escalating the levels of poverty and hunger. The runaway inflation and price rise is adding to people’s woes and destroying livelihoods,” it said.

“The historic struggle by our farmers continues into the ninth month now, with the government being obdurate in not repealing the three anti-farmer laws.”

On the Pegasus snooping controversy, the parties said: “Procuring of the Pegasus military spyware for surveillance of people by the Government of India is extremely alarming. The government refuses to answer one straight question — has it or any of its agencies purchased the Pegasus spyware from the Israeli firm NSO, known for cyber military surveillance?

“The government must answer and come clean. Such surveillance is not only a gross violation of people’s fundamental right to privacy but is an attack on Indian democracy and democratic institutions.”

The joint statement also referred to what most Opposition leaders see as reckless privatisation by the government.

“The destruction of the economy is accompanied by a mega loot of our national assets; large-scale privatisation of the public sector, including banks and financial services; the privatisation of our mineral resources and public utilities to benefit the cronies of the Prime Minister,” it said.

“1. Augment vaccine production capabilities, procure vaccines globally and speed up the free universal mass vaccination drive; provide adequate compensation for those who lost their lives due to Covid; 2. Implement free cash transfers of Rs 7,500 per month to all families outside the income tax bracket, distribute free food kits containing all essential commodities of daily consumption to all the needy; 3. Withdraw unprecedented hikes in central excise duties on petroleum products,” the statement said.

“4. Repeal the three farm laws; 5. Stop and reverse the unbridled privatisation; 6. Stimulus packages for MSMEs; 7. Enlarge MGNREGA, bring urban employment guarantee scheme; 8. Prioritise vaccination of teachers, staff and students to ensure early reopening of educational institutions; 9. Hold Supreme Court-monitored judicial enquiry into the use of Pegasus spyware and the Rafale deal; 10. Release all political prisoners, including those (arrested) under draconian UAPA in Bhima Koregaon case and anti-CAA protests, stop using other draconian laws like sedition/ NSA to violate democratic rights and civil liberties of the people; 11. Release all political prisoners in J&K. Restore full statehood including J&K cadre of central services, conduct free and fair election at the earliest.”

TMC to Cong: Invite all parties