The PM had asked whether a turbine could be used to harvest water from moisture in the air and oxygen too, thus serving as a three-in-one machine 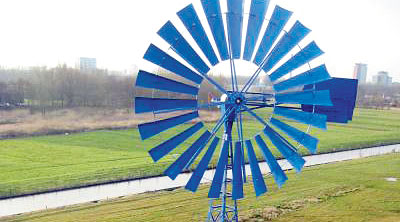 Prime Minister Narendra Modi’s question whether a wind turbine could be a three-in-one device to extract energy, water and oxygen from the air hangs somewhere between outlandish and impractical, sections of scientists said on Friday.

Modi, during a recent conversation with the head of a Danish wind-turbine maker, had asked whether a turbine could be used to harvest water from moisture in the air and oxygen too, thus serving as a three-in-one machine.

The Prime Minister’s suggestion and Vestas CEO Henrik Andersen’s response that he might invite Modi to Denmark as an “idea generator” for that country’s research and engineering community have drawn political taunts and support. Some scientists, ignoring the politics, brainstormed on the challenge.

Some said the challenge is: can the energy from a wind turbine be used into processes that can produce both water and oxygen? The uncertainty and impracticality emerges from energy economics.

“The engineer in me says, basically, yes, if you give me a source of power, I could use it to run some process,” said a Mumbai-based senior researcher. “It is a matter of cost. What is the cost per litre of water generated this way versus the use of grid power or some other source of energy such as solar power? This is a question of economics, not science. Like solar refrigeration, possible, but what is the cost compared to the alternative?”

Pure oxygen extraction from air may require fractional distillation, which is expensive and super energy intensive, the researcher said. Oxygen enrichment is possible through the use of materials called zeolites, which is how most portable oxygen concentrators work.

Engineers at the Delft University of Technology in the Netherlands had 12 years ago demonstrated a prototype wind turbine that they proposed could be used for seawater desalination.

While a traditional windmill drives a pump, the Delft engineers had proposed a high-pressure pump that pushes water through a reverse osmosis membrane to produce fresh water directly from seawater. The technology was intended for deployment in coastal areas.