Weather department has forecast heavy rainfall in many parts of the state, including Bhubaneswar and Cuttack, in the next 24 hours 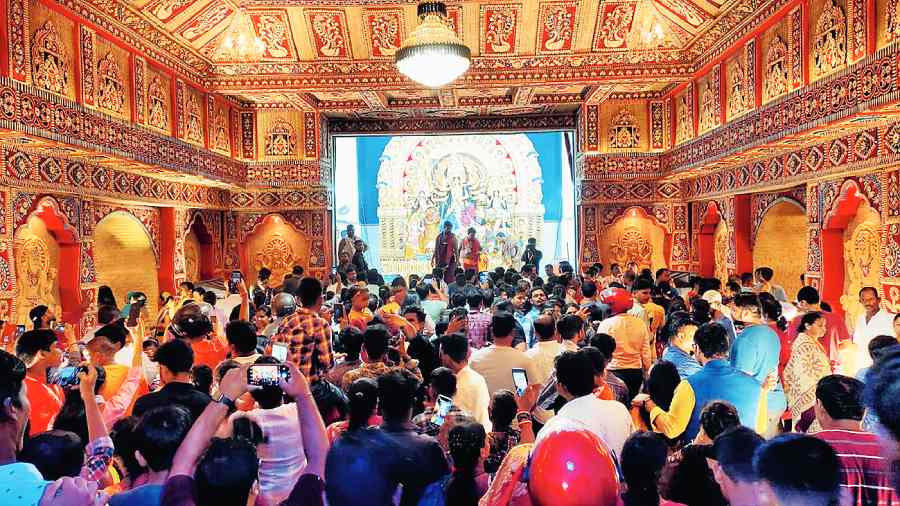 Heavy rain failed to dampen the Puja spirit in Cuttack and Bhubaneswar.

Despite rain lashing the two cities in the last 24 hours, people thronged the pandals in large numbers. The turnout at pandals was high even in Puri where the devotees braved rain to worship the goddess.

The weather department has forecast heavy rain in many parts of the state, including Bhubaneswar and Cuttack, in the next 24 hours.

The decline in Covid-19 cases in Odisha has instilled confidence in people to visit pandals without the fear of getting infected.

For the third consecutive day, Covid cases remained below 100 in the state, with 68 cases reported on Wednesday.

“We are back to Cuttack city, famous for its Durga Puja, after two years. There was no celebration of Puja in such a big way for the last two years owing to Covid restrictions. We enjoyed it this time. Despite the rain, I went to the mandaps to have a darshan of the deity,” said Sucharita Swain, a writer.

Durga Puja celebrations in Odisha began from Cuttack city. The first Durga Puja was reportedly organised way back in 1509 by a Bengali gentleman at Balu Bazar in Cuttack. Senior member of the Balu Bazar Puja Committee, Suryakanta Sanganeria, said: “The Puja was first organised in 1509 by one Banerjee family who had come along with Chaitanya Mahaprabhu from Nabadwip to Odisha. During their sojourn here, the Banerjee family approached the people of Cuttack for their co-operation to organise Durga Puja. People wholeheartedly supported the move and the Puja began. Even when famine gripped Odisha in 1865-66, the Puja was not stopped. It did not stop even during the Spanish flu of 1919.”

In the Silver City, renowned for its filigree work, Durga Puja is famous for its extravagance and the amount of silver and gold used to decorate the idols and the tableaux. Nearly 172 pandals are erected every year during Durga Puja in Cuttack. The Choudhury Bazar puja started the trend of adorning the goddess with a silver crown in 1956.

So far, 28 chandi medhas (silver tableaux) have been installed across the city and seven Durga idols flaunt crowns made of gold.

In Bhubaneswar, Durga Puja was earlier confined to the Old Bhubaneswar only.

The Old Station Bazar, where most of the Bengalis reside, is considered one of the oldest puja pandals of the city.

Commissioner of police (Bhubaneswar-Cuttack) Soumendra Priyadarshi said: “We were aware that people will come out in large numbers to see the pandals this year. Accordingly, we have made elaborate arrangements. Immersions will begin on Friday and we are hopeful that it will be a peaceful affair.”

Earlier, Durga Puja in Puri was mostly confined to the temple of Maa Bimala located inside the 12-century Jagannath Temple.

However with the passage of time, pandals started being erected in the city like the rest of the state. This year, nearly 60 pandals have been erected in the temple city.