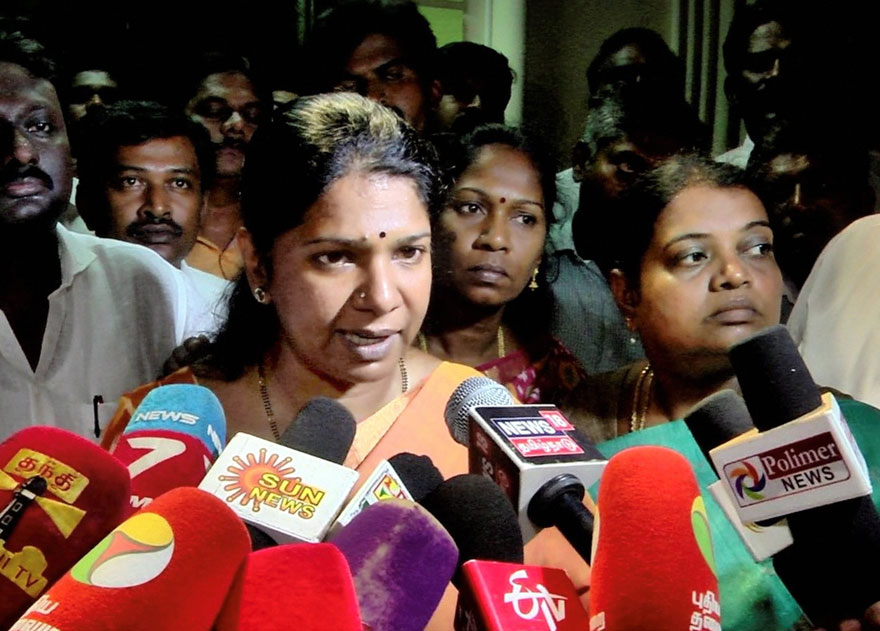 Thoothukudi DMK candidate Kanimozhi has accused the BJP of engineering Tuesday evening’s income-tax raid on her home to “intimidate” her, with the Congress and Bengal chief minister Mamata Banerjee echoing the charge.

Income-tax officials have confirmed they found “nothing” during the raid.

“(The) BJP cannot prevent my success through this income-tax raid. The raid is anti-democratic, deliberately planned and tested, and no documents have been seized,” Kanimozhi, daughter of late chief minister M. Karunanidhi and head of the party women’s wing, said in the early hours of Wednesday.

“They want to intimidate us through this. They have come to stop elections in Thoothukudi. DMK volunteers will be working with more enthusiasm.”

Income-tax officials told reporters the raid had been carried out on the basis of a tip-off from Thoothukudi collector Sandeep Nanduri about unaccounted cash being stashed on the first floor of the DMK candidate’s home.

Kanimozhi’s brother and DMK president M.K. Stalin accused the poll panel of bias, claiming that ADMK ministers were distributing cash and that Soundararajan had “crores stashed in her house”.

“Why no raids there? Who will take action?” he said, accusing Prime Minister Narendra Modi of using government agencies “to interfere in the electoral process… because of the fear of losing”.

The Congress too accused the Modi government of targeting Opposition leaders through its agencies, PTI added.

Senior Congress leader P. Chidambaram tweeted that “the news” was that nothing had been found during the search of Kanimozhi’s home.

The former finance minister alleged that the income-tax department was taking “autocratic and partial” action in Tamil Nadu in the run-up to the elections. “How is it that the officials receive tip offs only on Opposition leaders?” he wondered.

Party leader Kapil Sibal said the BJP was “flooded” with money and yet the authorities were targeting the Opposition, which is facing a cash “drought”.

“It’s a great shame that the BJP is using the central agencies against Opposition leaders and their parties to try and harass them into submission,” Mamata told a rally in Kandi, Murshidabad.

The raid on Kanimozhi came soon after President Ram Nath Kovind rescinded the election to the Vellore parliamentary constituency on a poll panel recommendation following the seizure of a sum of Rs 11.53 crore from the relative of a DMK leader there.

The DMK’s Vellore candidate, Kathir Anand, has told the Election Commission he would go to court if it does not restore the election.

In a letter to the poll panel, he said the “entire exercise carried out by the EC is only to favour the BJP-AIADMK combine” and asked why it was not acting on the allegations of cash distribution by AIADMK candidate A.C. Shanmugam.

Shanmugam too has threatened to petition Madras High Court challenging the rescinding of the election.

Income-tax officials claim that Srinivasan has confessed that the cash was to be used to influence voters in favour of the DMK.

Anand said the income-tax department had not listed any incriminating evidence in its seizure inventory panchnama, and alleged the raid and seizures were illegal under Section 132(1) of the Income Tax act.

Last week, income-tax sleuths had raided 18 places in the state.

In anecdotes, the bribes being allegedly offered to the voters vary from Rs 200 in Hosur in northern Tamil Nadu to Rs 2,000 in Theni in the south. These are still lower than the sums that voters allege were offered to them in Andhra Pradesh, which voted on April 11.

Shadow of Sterlite on scion showdown in Tamil Nadu