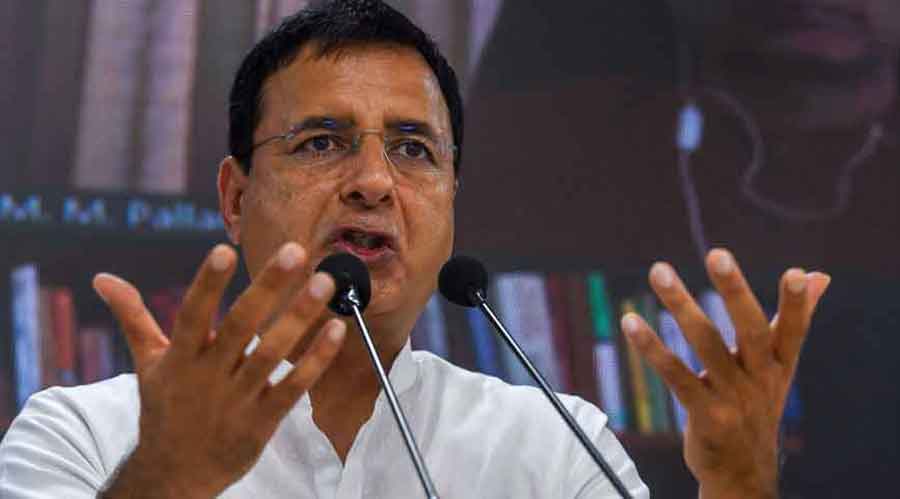 The Congress on Tuesday said Rahul Gandhi's questioning by the Enforcement Directorate in the National Herald-AJL case is "unconstitutional and malicious" and aimed at muzzling the fearless voice of the people of the country.

Congress general secretary and chief spokesperson Randeep Surjewala claimed that the Centre is scared of Gandhi's politics as he is raising issues concerning the public and asked whether he has become a hurdle in the path of Prime Minister Narendra Modi protecting the interests of his "cronies".

"This entire exercise is illegal, unconstitutional, malicious and an exercise by a prime minister burning in the fire of political vendetta," Surjewala told a press conference here.

"The government is scared of Rahul Gandhi's politics as he is raising issues concerning the common people," he said.

Surjewala also said the protest march by Congress leaders in support of the former party chief will continue, adding that the "descendants of (Mahatma) Gandhi will not fear from the descendants of (Nathuram) Godse".

He claimed that the Delhi Police arrested as many 20,000 Congress leaders on Monday and kept them in illegal custody for 12 hours, and said five lakh people across the country have courted arrest in protest.

Surjewala said the manner in which Congress leaders were attacked and beaten up on Monday shows that the BJP-led Centre is scared.

"Is this country democratic or an unbridled dictatorship? We are descendants of Gandhi. We will walk again. This is our satyagraha," he said when asked if they would again walk down to the ED office.

Surjewala said the ED action is based on a private complaint from BJP leader Subramanian Swamy, which has been stayed on his appeal. An ED summons can only be based on an FIR, he claimed, alleging that it is illegal.

Seeking to know why Gandhi and the Congress are being targeted by the ruling Bharatiya Janata Party (BJP), Surjewala asked, "Is this a conspiracy to muzzle the voice of people? Has Rahul Gandhi become a hurdle in the way of the prime minister protecting the interests of his cronies?"

The Congress leader said when Gandhi had questioned the prime minister on China's intrusion, the latter had said there was no intrusion. Two years have passed and China is still in Indian territory, he added.

Surjewala also said Gandhi has been constantly cornering the Centre over the rising inflation and has asked questions on declining jobs, the condition of the MSMEs in the country and the falling rupee.

The former Congress chief forced the government to review its COVID-19 strategy, including ensuring free vaccination, and raised his voice in the interest of migrant workers, he said, adding that he backed the farmers protesting against three contentious agriculture laws of the Centre when the BJP was calling them terrorists and naxals.

Congress leader P Chidambaram also hit out at the BJP over the ED summoning Gandhi.

In a tweet, the former Union minister asked, "Will the learned spokespersons of the BJP please answer ToR (terms of reference) following the questions: Which is the 'scheduled offence' under PMLA that has triggered an investigation by ED?"

He also asked which police agency has registered an FIR in respect of the scheduled offence.

"Where is the FIR? Will you please show us a copy of the FIR? Did you know that absent a scheduled offence and absent an FIR, the ED has no jurisdiction to start an investigation under PMLA?" Chidambaram wrote on Twitter.