Government says that 'in totality of facts and circumstances of present case, it would be in interest of justice to produce and preserve CCTV footage' 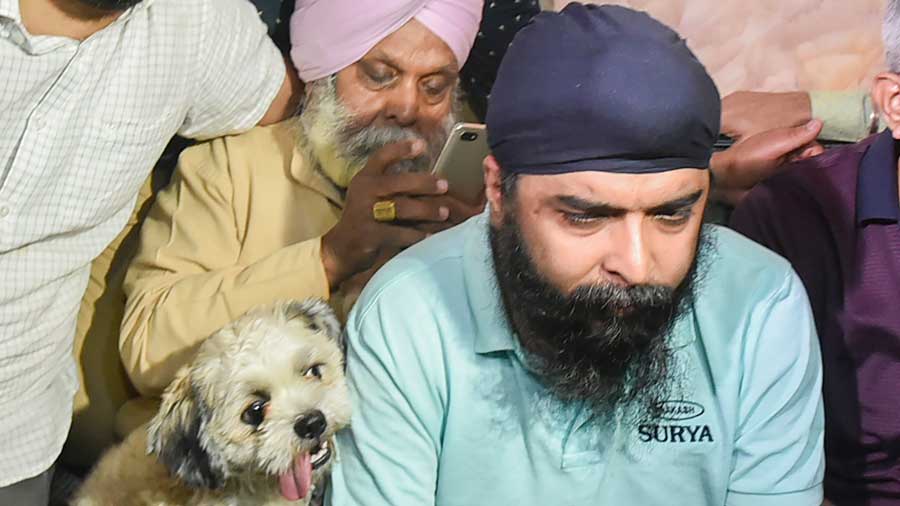 The Punjab government Saturday moved two applications before the Punjab and Haryana High Court here, seeking the Centre be made a party in the BJP leader Tajinder Pal Singh Bagga arrest case, and that the May 6 CCTV footage of Janakpuri and Kurukshetra police stations be preserved.

The Punjab government has alleged that its police personnel were "detained" at Janakpuri and Kurukshetra police stations when they had gone to arrest Bagga in connection with a case registered against him at Mohali last month.

Additional Solicitor General of India Satya Pal Jain, who represented the Delhi Police, said on Saturday, "They (the Punjab government) have moved these two applications, when a notice is issued by the court we will reply to that."

One of the two applications by the Punjab government seeks to implead the Union of India and the Delhi Police commissioner as respondents.

The second plea is that CCTV footage at Pipli and Sadar police stations in Kurukshetra (Haryana) and Janakpuri police station (Delhi) dated May 6 be preserved.

On Friday, the Punjab government had moved a habeas corpus petition in the High Court against the alleged detention of their personnel, a charge denied by Delhi and Haryana police. The matter was heard by the bench of Justice Lalit Batra.

Jain said that with the consent of all parties, the hearing on Saturday was adjourned for May 10 as the habeas corpus was looked into by another bench.

"On Saturday, the case was adjourned for Tuesday by the court of Justice G S Gill," he said after the court proceedings.

In their plea in the court on the preservation of the CCTV footage, the Punjab government says that "in totality of facts and circumstances of the present case, it would be in the interest of justice to produce and preserve the CCTV footage dated May 6, 2022."

Delhi BJP leader Tajinder Pal Singh Bagga was picked up from his home Friday morning by the Punjab Police. He was being taken to Punjab via road when the Haryana Police stopped the Punjab Police convoy. He was the brought back to the national capital by Delhi Police.

The Delhi Police had registered a case of kidnapping based on a complaint by Bagga's father Preetpal Singh.

After the FIR was lodged, the Delhi Police obtained a search warrant from the Dwarka district court, Jain said on Saturday.

The AAP rules Delhi and Punjab while the BJP governs Haryana. However, the Delhi Police comes under the Union Home Ministry and not the AAP-led Delhi government.

Bagga, who is also the national secretary of the Bharatiya Janata Yuva Morcha, was held in connection with a case registered against him in Mohali last month.

Delhi Police Counsel Jain said on Saturday, "So far as we are concerned, on behalf of Delhi police, I made it very clear that we have not detained any Punjab police official. Bagga was taken into custody by us (Delhi Police) from Pipli in execution of the order passed by a Delhi court.

"He was taken to Delhi, got medically examined and produced before a judge late evening. The court ordered that he be released and allowed to go home and Mr Bagga was then sent home." Jain said, adding he has filed a status report on behalf of Delhi police in the entire matter.

Responding to a question, he said Haryana has also maintained it did not detain any Punjab police official.

On his part, Punjab government counsel Poneet Bali told reporters outside the high court on Saturday that Bagga was served notices on five occasions, but he did not respond.

"The Punjab police has every right to arrest an accused," he said.

While referring to the kidnapping complaint, the counsel claimed the Delhi Police obtained a search warrant from a court without disclosing the fact that Bagga is an accused in a case and he has been arrested.

"So, whatever is the future course of action as far as Mr Bagga is concerned will definitely be taken."

The habeas corpus petition was moved because Punjab was concerned that its police officials who had gone on an official duty were being "detained" rather than facilitated, which is a very serious issue, Bali said.

He said the information related to the search warrant was flashed by the Delhi Police in the region Friday morning, after which the Haryana Police stopped the car at Pipli in Haryana in which Bagga was being taken to Punjab.

Delhi Police Counsel Jain said Punjab personnel did not inform the local police in Delhi before arresting Bagga, nor did they follow the laid down procedure while making the arrest.

"So far as the Delhi Police is concerned, we have acted within the legal parameters as laid down by the courts. The Punjab Police did not consult us or inform us before taking Mr Bagga into custody.

"Those who had gone there (to Bagga's home in Delhi) they were also not in uniform, they were in plainclothes," said Jain.

Last month, the Punjab Police has booked Tajinder Bagga on the charges of making provocative statements, promoting enmity and for alleged criminal intimidation.

The case was registered on a complaint of AAP leader Sunny Ahluwalia, a resident of Mohali. The FIR registered on April 1 referred to Tajinder Bagga's remarks on March 30, when he was part of a BJP youth wing protest outside the residence of Delhi Chief Minister Arvind Kejriwal.