The saffron party also alleged that with Bagga's arrest, it was clear that the AAP national convener had 'misused' the Punjab Police for personal benefit 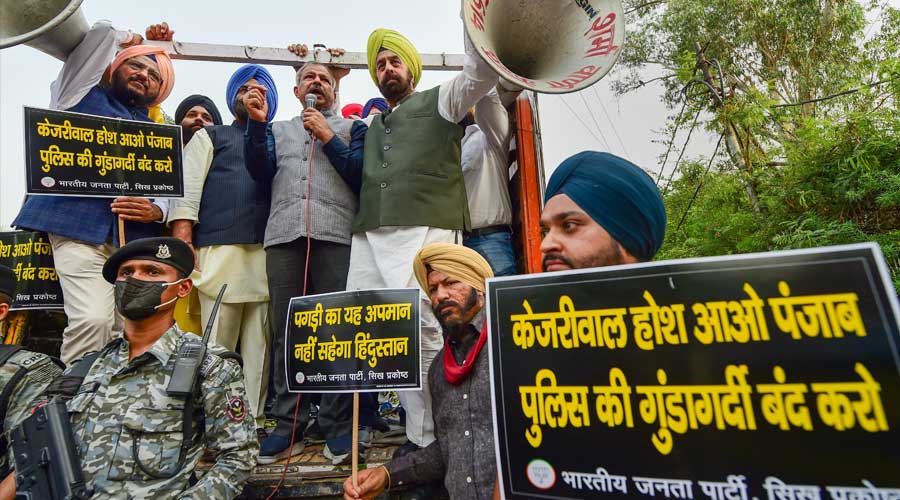 Condemning the arrest of its leader Tajinder Singh Bagga by the Punjab Police here, the saffron party on Saturday staged a protest outside Delhi Chief Minister Arvind Kejriwal's residence and called him "a dictator".

Delhi BJP chief Adesh Gupta also alleged that with Bagga's arrest, it was clear that the Aam Aadmi Party's national convener had "misused" the Punjab Police for personal benefit.

"Kejriwal is a dictator. What was Bagga's crime? He just asked for Kejriwal's clarification on his remarks on '(The) Kashmir Files'. He was not allowed to wear a turban during the arrest," Gupta said, adding that the BJP will "not tolerate the insult to the turban".

On Friday, the Punjab Police arrested Bagga from his residence in Delhi's Janakpuri, but the city police brought him back to the capital from Haryana, saying its Punjab counterpart did not inform it about the arrest.

The city police also registered a case of kidnapping based on a complaint by Bagga's father Pritpal Singh Bagga, who alleged that "some people" came over to his house at around 8 am and took his son away.

Bagga, also the national secretary of the Bharatiya Janata Yuva Morcha, was held in connection with a case registered against him in Mohali last month.

After bringing him back to the capital, he was produced before a magistrate late on Friday.