Advertisement
Home / India / It's a revolution in Punjab, it will now spread all over the country: Kejriwal

It's a revolution in Punjab, it will now spread all over the country: Kejriwal

AAP wins 77 seats and leads in 15, according to poll results declared by Election Commission 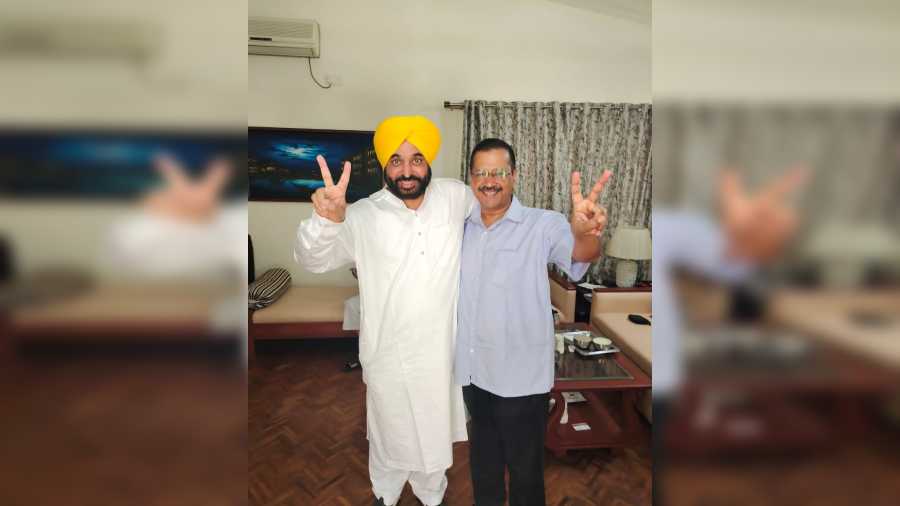 Hailing his party's decisive win in the Punjab assembly polls, AAP chief Arvind Kejriwal on Thursday said "revolution" first happened in Delhi, then in Punjab and will now happen all over the country.

The people of the state with their huge mandate have also said that Kejriwal is not a terrorist, he said, referring to former AAP leader Kumar Vishwas' allegation that Kejriwal is "ready to take support" from separatist elements in Punjab to become the state's chief minister.

The Aam Aadmi Party (AAP) stormed to power in Punjab, winning 77 seats and leading in 15, according to poll results declared by the Election Commission so far for the polls for 117 assembly seats.

Addressing AAP workers and leaders at its headquarters here, Kejriwal said the people of Punjab have given a huge mandate to the party even though "huge conspiracies" were hatched by rivals to stop it from winning the polls.

Latching on to Vishwas' allegation BJP, Congress and other parties had questioned the Delhi chief minister.

However, Kejriwal had dismissed the allegation as "laughable" and said he must be the "world's sweetest terrorist" who builds schools and hospitals.

"People of Punjab have done wonders. We all love you Punjab," he said as he congratulated the voters for leading the AAP to a "glorious victory" in the assembly polls.

With their overwhelming support to the AAP, the people of Punjab have made political stalwarts bite the dust, Kejriwal said.

"The results of the Punjab elections that has come today is a big 'inquilab'. It has shaken many big chairs in Punjab," he said, adding, "First this revolution happened in Delhi, then in Punjab and it will now happen all over country."

"We all have to take a vow that we will make a new India, such an India where one person would love another and there would not be any place for hatred, such an India where no body sleeps hungry, where our mother and sisters are safe, where children of rich and poor both get the best education..." he said.

Underlining that the Punjab poll results signifies the strength of the 'Aam Aadmi' (common man), Kejriwal asked people to realise their strength and join his party to help it achieve its goal of bringing change in country's system and politics, and make a "new India".

"His mother is a sanitation worker at a government school while his father is a farm labourer....There is so much strength in the common man. I always say don't challenge the Aam Aadmi as he would bring a big 'inquilab' the day he rises," the AAP chief said.

"Today I call upon the people of this country, women, youth, farmers, workers traders and industrialists, identify your strength and rise. It's time to bring an 'inquilab' in the country. We have wasted 75 years, not anymore," he said.

Kejriwal congratulated Bhagwant Mann, the AAP's chief ministerial candidate for Punjab, for his victory in the assembly elections and said people have given the party a huge responsibility by giving it such a huge mandate.

Kejriwal asked his party's leaders and workers to practice the politics of love and service.